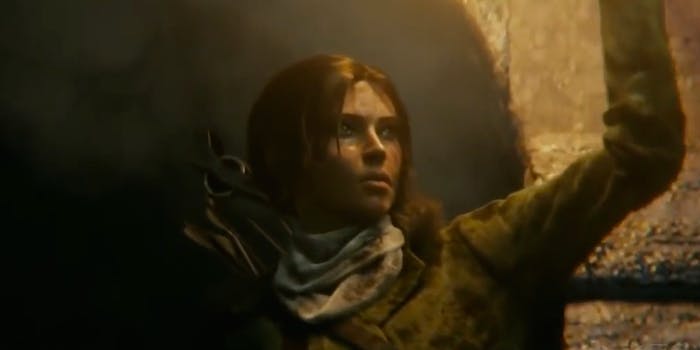 At E3, we saw the same male protagonists—but women’s representation is still lacking

Women make up half of all gamers. So why aren't they being represented onscreen?

The Electronic Entertainment Expo (E3) ended this week, leaving many gamers with a feeling of excitement and anticipation for the games and innovations to come over the next year. Unfortunately, those gamers were also left feeling frustrated, depressed, and with an overall feeling of dread about the current state of women in the gaming industry.

The general public isn’t welcome at E3, unlike the Penny Arcade Expo conventions or San Diego Comic-Con. It’s a trade show for video game companies and press, where upcoming games and hardware are shown off. This industry-heavy focus makes it a good place to see how things are going in the industry, and for women this year things looked pretty poor. On Twitter, many expressed their disappointment over the representation of women in the games presented, as well as the lack of women on stage as professionals.

@ashly_burch @codejill I am so frustrated. E3 this year is so depressing. Again.

The game trailers shown during the first press conferences and presentations made it clear right away that no companies were really branching out into new and diverse ground when it came to protagonists. There’s even a video supercut making the rounds showing 40 of the same male protagonists we’ve seen time and time again. Playable female characters were lacking as a result, with a few exceptions.

Nintendo caused a lot of excitement during their press event, perhaps showing the most playable female characters out of all the companies attending E3, thanks to games like Super Smash Bros. and Hyrule Warriors. Sony gave us a look at Infamous: First Light, a standalone DLC featuring Abigail from Infamous: Second Son, and Electronic Arts showed off Mirror’s Edge 2 and a trailer for Bioware’s Dragon Age: Inquisition, which was at least voiced by the female option for the protagonist in the game. We also saw Ellen Ripley’s daughter in Alien: Isolation and a number of other games with women characters that show hope isn’t completely lost. The problem is that these representations were dwarfed by the number of men featured in games.

Gamers are so starved for these female characters that when Nintendo dropped the slightest hint that we could play as Zelda in their upcoming Wii U game it made headlines, only to be followed by major disappointment when the company clarified their comment was meant jokingly. There are so few female protagonists that when we do see them, we agonize over whether or not their representations are really strong enough. A lot of gamers were thrilled when Microsoft revealed the trailer for a new Tomb Raider game, but how Lara Croft was portrayed quickly became a topic of controversy. Croft being shown in therapy was criticized by some and supported by others. Does Croft needing therapy make her strong and realistic or is it a weakness, since we rarely see her male action hero counterparts need the same?

Needing therapy is definitely not weak, but with so few other women leading game titles, some feel this portrayal is sending a particular message they don’t want to see. The scarcity of women in games is also why seeing a woman portrayed as a hostage in Ubisoft’s Rainbow Six: Siege disturbed some gamers. Perhaps a man can also be a hostage and rescued in the game, but the fact that the woman was shown among trailers filled with strong male protagonists did not sit well.

Ubisoft continued to not win points with gamers when they revealed that adding a woman to the playable characters of Assassin’s Creed: Unity would have been too much work. It turns out production issues were behind the lack of a playable woman in Ubisoft’s Far Cry 4 as well. Gamers took to Twitter in protest, creating the hashtags #womenaretoohardtoanimate and #NoWomenNoAC. There’s also a Change.org petition where fans are expressing their disappointment.

Too hard to animate women, but Metal Gear Solid has horses that poop in real time. #womenaretoohardtoanimate

In a statement, Ubisoft said they “recognize the valid concern around diversity in video game narrative” and will “continue to look at showcasing diverse characters.” They are apparently looking forward to gamers meeting “some of the strong female characters in Assassin’s Creed: Unity,” but the harm is done. The issue of animating female characters is unfortunately one not only found in the video game industry, but in animation at large.

Just as clear as the poor representation of women onscreen was the lack of female presenters at E3. At the press events there were only five women speaking presenters, which Polygon points out is less than the number of severed heads that were shown. If there were more women working in the industry, perhaps we’d see better representation for women in games as well. There are women capable and eager to work in gaming, contrary to what some might think, if the industry will give them the chance.

Pointing out any of this is enough to incur harassment from certain parts of the gaming community. It happened last year at E3 and happens too often in the community at large, as sexists and misogynists attempt to protect what they see as their space. It isn’t their space, as has been proven repeatedly over the years. Women make up about half of all gamers, a fact that should silence fellow gamers and industry professionals  that try to argue there isn’t a market for games featuring women.

It’s unfortunate that much of the exciting news from this year’s E3 has been dampened by the number of industry problems revealed at the expo, but by sparking these conversations perhaps it will lead to change and even better expos in the future. That way gamers, especially women, can just enjoy the games instead of feeling disappointed that they’re clearly not even a thought in the minds of the people behind them.