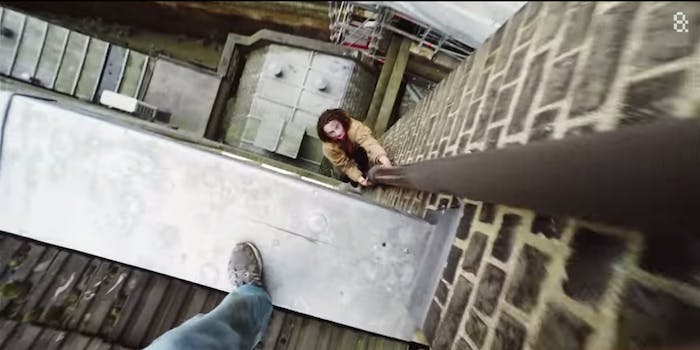 Zombies do parkour in this video game teaser

Here's a training guide for the inevitable apocalypse.

Film production company Ampisound drew inspiration (and funding) from an upcoming video game to produce a parkour video about escaping from the undead.

In this promotional YouTube video for Dying Light, the video game being developed by Techland, also the studio behind open-world zombie game Dead Island, a survivor forages for supplies in the alleys of Cambridge, England, and then hightails it over the rooftops when some growling zombies turn the corner.

Both the game on which the video is based and the video itself are clearly fiction, because everyone knows real zombies can’t climb buildings. That’d just be silly.

Dying Light draws its name from the transformation that takes place among the infected humans between day and night. During the day the infected are slow and shambling, and this is when players can (relatively) safely parkour run across the city, scavenging for supplies. At night the infected become much stronger and faster, and can follow players onto the rooftops.

Dying Light is being released on PC, PlayStation 4, and Xbox One on Jan. 27.