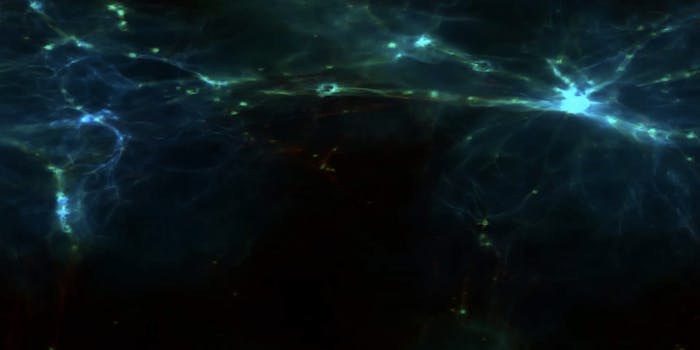 Behold the first galaxies that shaped our early universe

This simulation from the Georgia Institute of Technology sheds light on the early universe.

The early universe, those first hundreds of millions of years after the Big Bang, is a time of mystery for us Earthlings. Now, some impressive simulations by researchers at the Georgia Institute of Technology and the San Diego Supercomputer Center can give us a peek into what that time looked like.

Here’s a dwarf galaxy about 1,000 times smaller than our Milky Way, frozen in a cosmological moment:

It looks a bit like an exploded jellyfish suspended in time. Intuitively, the red corresponds to hotter gases and the blue to cooler ones. Older stars shine yellow and newer ones twinkle blueish white.

Researchers think that dwarf galaxies like this one were typical in that period immediately after the Big Bang. Those first tiny galaxies formed more than 13 billion years ago. Not only were those little exploded jellyfish plentiful, they actually helped shape the evolution of our universe, according to a paper published earlier this month in the Monthly Notices of the Royal Astronomical Society.

Since light takes time to travel through space, when we look at the stars we are looking back in time. Astronomers studying the early universe cannot “see” those dark ages because the light is simply too dim to reach us. They can only see when the universe starts to shine with the light of the first stars.

Ultraviolet light from the first stars eventually split the hydrogen electrons from protons again, a process called re-ionization. That re-ionization took about 800 million years but as a press release from the Royal Astronomical Society explains, “Astronomers aren’t in agreement on which type of galaxies played the most important role in this process.”

Most studies focus on the role of larger galaxies, but the new study examines the small ones.

“It turns out they did form stars, usually in one burst, around 500 million years after the Big Bang,” John Wise, a professor at Georgia Tech who led the study, said in another press release. “The galaxies were small, but so plentiful that they contributed a significant fraction of UV light in the reionization process.”

Wise and his colleagues demonstrated that this was so with computer simulations. Thanks to their work, we can see the dwarf galaxies that shaped our universe today through some beautiful videos.

Formation of the first galaxies in the universe:

“It’s very hard for UV light to escape galaxies because of the dense gas that fills them,” said Wise. “In small galaxies, there’s less gas between stars, making it easier for UV light to escape because it isn’t absorbed as quickly. Plus, supernova explosions can open up channels more easily in these tiny galaxies in which UV light can escape.”