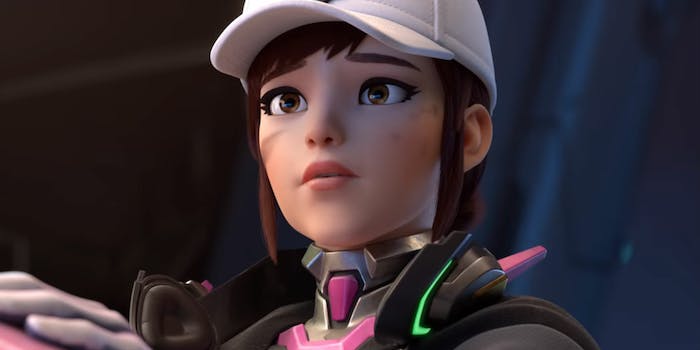 The film focuses on D.va's identity.

Overwatch is a video game filled with colorful characters—heroes, villains, scientists—and almost all of them have a compelling story to tell if you look beyond the multiplayer combat action. We had Mei, a chief Overwatch scientist, tragically lose her team and survive the harsh Arctic cold by her wits. There was also Reinhardt, the boisterous German Crusader whose pride left his squad and king dead. Now, with the latest Overwatch short film, D.va, a character who was previously considered fuel for jokes, memes, and plenty of laughs shows clear signs of PTSD, and it re-contextualizes her story as something that survivors can find a glimmer of hope in.

The character of D.va has always been presented as a quirky, charming spitfire of a girl. She’s a former pro eSports competitor, but later found herself recruited into a South Korean military defense program known as “MEKA.” She translated her mouse-and-keyboard skills into being a top gun mecha robot pilot, beating back swarms of robotic monstrosities known as the Omnics that were terrorizing the world. In-game, players use her giant robot to shove enemies out of the way, pulverize them with rocket and machine gun fire, and absorb enemy projectiles with her matrix shield, all while the young woman inside quips at her enemy’s lack of skill.

Fast forward to the new short film, and D.va has become a star once again. Her face is plastered on posters and skyscraper lights, she’s the hot topic of every news update, and she’s a key player in a five-man squad of mech pilots that defend the Korean coast from future attacks. Things begin simply enough. D.va (real name “Hana”) and her colleague, a mechanic named Daehyun, are listening to a news report on the MEKA squad’s latest battle while D.va fixes up her mech. In between some banter, it becomes clear that every member of D.va’s team is currently out of commission for one reason or another.

“You beat the [Omnics]. They won’t be back for months. You need a break,” Daehyun says, triggering a flashback for D.va. She can be seen careening through a massive storm, battling a giant, red-eyed monstrosity, before she hears one of her teammates cry “I’m hit!” and her eyes go wide in terror. Her eyes remain wide back in the hangar, where she’s clearly lost in thought, before she softly responds: “I…can’t.”

D.va has always been considered one of the lighter characters in Overwatch’s wide and varied cast. She’s quirky, she’s spunky, and her ultimate move has her yell “nerf this!” before exploding her mech. On top of that, Overwatch’s fan culture has marked her as almost a gremlin of mischievousness, hoarding Doritos and soda cans in a parody of the typical gamer stereotype. What this video shows is that, much like many other Overwatch characters, D.va is far more than that. She’s a fighter and a survivor of tragedy.

It’s more than just the glossy eyes, too. The abuse survivors who I know often feel an enormous sense of guilt, either over their own actions or the people around them who were caught in the crossfire of their abusers. D.va clearly feels that she has something to make up for. The Omnic threat is returning soon, and perhaps it was her actions that led to her team being seriously injured.

For a character portrayed as a stereotypical gamer, D.va also isn’t afraid to put in that work. Abuse survivors in my own life have also found a sense of comfort (or just delaying their grief) in applying themselves to large amounts of work. In a state where nothing can feel certain, the drive to work and push one’s self can often be the only constant available, the only tool they have for pushing away the darkness that’s crept up inside them.

But even Daehyun recognizes that she’s clearly suffering, begging her to stop putting the entire weight of the world on herself and ask for help. Even though I myself am not a survivor of abuse, this is something that’s been present in my own life, the desire to reach out and help someone in pain, even if they’re pushing back. It’s not uncommon for survivors to push back against that aid, driven by their guilt and uncertainty. It can break people, relationships, and spirits, but like a good mechanic and partner, Daehyun is there when D.va is ready to accept that help, and in this case, it makes almost all the difference.

D.va was already a popular character for the proud femininity she displayed. The Daily Dot ranked her as the No. 1 hero in Overwatch, for goodness sake. Now that she’s gone beyond even that, folks on Twitter are sharing the joy they feel that their favorite character is flawed and hurting, much like them.

the dva short is making me cry before school

i’ve loved her since day one, but seeing her, my little quirky hero, have ptsd too is really, really empowering

Perhaps most interestingly of all, the last minute of D.va’s short also highlights one final factor that abuse survivors often live with. D.va is once again working to repair her mech, and a news anchor on the television behind her says that the Korean government “confirmed she emerged without a scratch.”

It’s not even a second later that it becomes clear that isn’t true. She’s covered in bandages masking cuts and bruises, with casts or slings on every limb except for her right arm. She’s beat up, but she’s still working, moving forward. That’s something anyone suffering from PTSD can relate to. While the world may not see every single scar they carry, they are there, and they’re working through them nonetheless. This time, though, D.va lets her friend help her out when she stumbles, and one thing becomes clear: You’ll never nerf this girl.