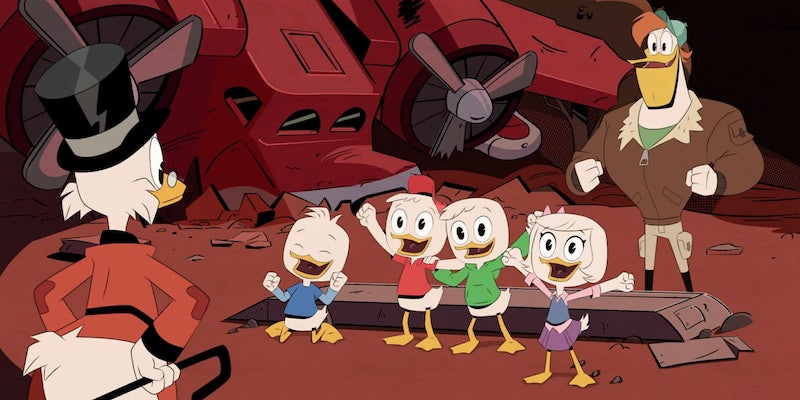 Why you should watch Disney’s ‘DuckTales’ reboot (woo-oo!)

Disney's reboot is reinventing the show we once loved.

This article contains spoilers—and it may get the DuckTales theme stuck in your head. Sorry.

The DuckTales reboot is much better than it has any right to be—and in some ways, it holds its own with the show you grew up with.

First announced in 2015, Disney’s decision to reboot the original series (which ran from 1987 to 1990) garnered plenty of initial fanfare—as did the reveal of the show’s all-star voice cast, the trailer, and series premiere. But after that? With a couple of exceptions, the conversation surrounding the show mostly fizzled out. Its months-long, midseason hiatus certainly didn’t help things, either.

Any show can get lost in the fray, of course, especially in a media landscape where there’s so much on TV that you can easily learn of a series’ existence and cancellation in the same headline. And with a show like DuckTales—a children’s TV show based on a previous series—it’s easy to assume it exists almost solely for the sake of nostalgia.

But now that the first season has officially wrapped, more than a year after airing its first episode, the DuckTales reboot is worth revisiting and celebrating for the changes it made to a beloved classic.

DuckTales, both the original and the reboot, follows the adventures of Scrooge McDuck and his three grandnephews Huey, Dewey, and Louie, who are left in Scrooge’s care by Donald Duck, in and around Duckburg. There’s plenty of mischief and hijinks in the family and among the recurring cast of characters.

But could you tell them apart?

In the original series, Huey, Dewey, Louie, and Webby Vanderquack (the granddaughter of Scrooge’s housekeeper who sometimes joins in on the adventures) were all voiced by Russi Taylor. The triplets wore identical outfits—the only difference was the color of their respective shirts and hats—and sounded similar to one another to the point where even Duckworth, Scrooge’s butler, has trouble telling them apart after watching them for several days. (The trio were first introduced in comics in 1937.) The differences in their characters were on the more subtle side.

The DuckTales reboot, however, makes each of them their own duck, and it’s evident from the get-go. For one, while the color schemes remain, they don’t dress identically anymore. Huey (in red) is the only one to wear the baseball cap from the original series and has on a short-sleeved polo. Dewey (in blue) has a T-shirt layered underneath a light-colored long-sleeved shirt. And Louie (in green) wears a hoodie. Their feathers on the top of their heads are arranged differently, as though each of them has their own way of styling their “hair.”

But it goes beyond the outfits. They each have their own personality and set of quirks, which can make the difference between saving the day or bringing chaos onto Duckburg. Plus, they’re each voiced by different actors.

Huey (Community’s Danny Pudi) is the oldest and often the brains of the group, one who’s attuned to sticking to the rules and being a good Woodchuck Scout (basically the show’s version of Boy Scouts). Dewey (Parks and Recreation’s Ben Schwartz) is a curious adventure-seeker ready to dive into the bigger mysteries with Webby (Kate Micucci) and team up with Scrooge’s driver and pilot Launchpad McQuack (Saturday Night Live’s Beck Bennett). Louie (SNL’s Bobby Moynihan) is described by his brothers as the “evil triplet” and is something of a schemer who tends to look for the easy way out but will jump in to save the day. Together, they can both make or break their adventures with their Uncle Scrooge.

Webby is a much bigger character this time around

In the reboot, Webby Vanderquack takes on a much greater role. She’s adventurous, resourceful and inventive, and able to handle herself in just about situation—thanks to years of training from her grandmother Mrs. Beakley (Toks Olagundoye)—but because of her isolation, she’s also socially awkward.

Webby is the closest thing the show has to a fangirl, one who’s obsessed with the past exploits of Scrooge McDuck and his family. But she’s also allowed her own stories, arcs, and friendships outside of those with Huey, Dewey, and Louie, particularly with another girl named Lena (Kimiko Glenn). She’s also in the center of the show’s larger mysteries beyond what shows up in standalone episodes.

In the original series, Webby designed to look like a miniature version of Daisy Duck, something that shows up as an Easter egg late in the first season. But this Webby has a much different outfit and hair design, although the pink bow remains. And thankfully, she stands on her own as a character.

The voice cast is incredible

In December 2016, Disney revealed the main cast of DuckTales with a video of them singing along to the DuckTales theme. It succeeded in reminding us that the theme is a hell of an earworm—chances are you’re humming it now—but also just how stacked the cast is.

Pudi, Schwartz, Moynihan, Bennett, and Olagundoye are all featured early in the rendition, but by the time the bridge comes along, the show unveils its trump card: David Tennant as Scrooge McDuck.

Many of the actors are able to put their own spin on the characters, but someone like Scrooge McDuck has a very distinct sound (not to mention a Scottish accent). Tennant, who is Scottish, pulls it off with aplomb as Scrooge revels in the joy of adventure, exasperation, and anguish along the way.

But that caliber extends to the supporting cast as well. Community’s Jim Rash (who, along with Moynihan, will also appear in the upcoming Disney series Star Wars Resistance) has a recurring role as inventor Gyro Gearloose. Lin-Manuel Miranda has guest-starred as Fenton Crackshell-Cabrera, who some viewers might know better as Gizmoduck. And the show has even put a spin on Donald Duck himself: Although Tony Anselmo regularly does the voice, the season finale will feature Don Cheadle stepping into Donald’s iconic shoes after Donald swallows a voice modulator so the others can understand him more easily.

For the most part, you can tune into episodes of DuckTales without prior knowledge aside from the premise itself. Scrooge, who used to be a big adventurer back in the day, is brought back into the game after the arrival of his grandnephews, where they’re often joined by Launchpad, Webby, and a reluctant Donald. Their foes are both mythical and based in the real world, the latter in the form of criminals and rivals looking to become even richer than Scrooge himself.

But the mysteries of DuckTales aren’t just in the magical items stored in Scrooge’s mansion or the trips they take, which sometimes give the show some Gravity Falls vibes. It’s in the growing threat of Lena, who’s possessed by her aunt Magica De Spell (Catherine Tate), a villain in the original who keeps trying to get her hands on Scrooge’s Number One Dime. And that threat is embedded into the question of what happened to the triplet’s mother Della, a mystery that hangs over much of the first season, which has expanded to reveal some of Scrooge’s and Donald’s backstory, not to mention the reason behind their falling out.

The show is uneven at times and it’s too early to tell whether it could eclipse the original. But it’s already made some notable improvements. With season 2 on the horizon, DuckTales still has plenty of time to smooth some of those feathers.

Still not convinced? You can watch the series premiere, “Woo-oo!”, on YouTube right now.