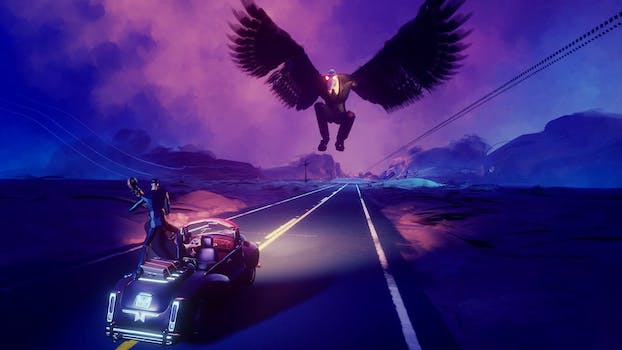 Review: This is just the beginning for ‘Dreams’

This long-gestating release from the team behind LittleBigPlanet and Tearaway is more of a creative platform than it is a proper game.

A little over two years ago, I stood in the lobby of a crowded convention center near a large group of strangers huddled around a single screen. Amid the buzz of the rest of the Game Developers Conference, this crowd intermittently gasped, laughed, and even cheered. Curious, I leaned in closer to see what they were watching.

A man was holding two PlayStation Move controllers in his hands, waving them about with cautious optimism. On the screen, a glimmering orb of light mirrored his movements and traced painterly shimmers of color against a dark backdrop.

I was impressed by the technology, the intuitive, responsive manner in which the game tracked player inputs. I was also drawn in by the striking visual style of the creation itself—how a shadowed forest responded in real time to the addition of various elements. More than this, though, I was astounded by the audience’s reactions surrounding me.

Here, right by the entrance to a convention center full of playable video games from almost every genre imaginable, the biggest draw was watching an aspiring artist craft an interactive world for the first time.

As a team member from Media Molecule guided the conference-goer through the various button prompts and mechanics, I listened to the hum of the audience and noted their exclamations of approval.

There still is some part of me that doubts the authenticity of the entire experience. But, regardless of their intent, the developers understood the most important thing about Dreams: getting in front of other people.

This long-gestating release from the team behind LittleBigPlanet and Tearaway is more of a creative platform than it is a proper game. Much like a Super Mario Maker, the product is only as good as its community. Perhaps that’s why the title has been “released” in Early Access for almost a year now. But the official launch of Dreams happened last week, with a fully crafted campaign and tightly curated marketplace for players to dive into.

When you first fire up the game, you’re greeted with a dramatic mission statement, as an ethereal voice declares “(an) idea could be anything… it could be EVERYTHING.”

Flashing lights and swirls of cosmic clouds crowd the screen and illuminate the breadth of Dreams’ available tools. It is at once a proof of concept and a promise of creative freedom.

You are then introduced to your Imp, a living being that functions as your means of navigating the various menus of Dreams. The “character” you control is an abstract spirit, who possesses other objects and actors to build out the scenes constructed within the game’s engine. Again, it can feel overwhelming to absorb all the information being broadcast upfront, but the narration only serves to encourage players that you—yes, you—can do this.

The place most players will start with Dreams is more than likely “Art’s Story,” the feature-length demonstration of what is possible to create in this engine.

Posing as a traditional video game campaign, this series of animated vignettes, musical numbers, and action sequences string together an overarching exploration of the intimate desire to create. Art, a disgraced jazz musician, is struggling to find his way and get back in with the former bandmates he has scorned. This journey dives deep through his subconscious, bringing cartoonish characters and bombastic visions to life.

While these carefully crafted levels are both charming and impressive to behold, they rarely offer a compelling or consistent experience. When “Art’s Story” finds a rhythm, it hums along between scenes of jubilant chaos. But sections that lean too heavily on platforming are sunk by the imperfections in character control, and those that tend toward the more story-focused rely on worn-out tropes and a generic appeal to the artist’s struggle. Similarly, there are a great deal of moments that require puzzle-solving or investigation that don’t hold up.

What’s most admirable about Dreams’ campaign is the nature in which these sequences were put together. Every asset, sound, and design was built from the ground up using Media Molecule’s internal creation tools—the very same that players around the world now have access to.

In theory, then, it is only a matter of time until every aspiring game developer with access to Dreams could put something like “Art’s Story” together. At least, that’s what the game would have you think. I couldn’t help but feel the closing message of inspiration rang a little hollow. Despite the nature of its production, this title was still produced and released under the guidance of a larger studio and published by a major corporation. The same degree of resourcing and access that this team was afforded is likely to never truly be democratized into the real world, but the tools and systems they were built upon could prove to be invaluable.

Using the design tools offered in Dreams’ creative suite, players are encouraged to bring their wildest ideas to life. And so far, the community (including Media Molecule themselves) are doing a great job of celebrating those innovative ideas. With organized lists and tagging, a self-policing group of engaged players can ostensibly keep the state of this marketplace how they agree it should be.

Thanks to an early access period, many players have already been given the chance to dive into Dreams’ creative suite. New Dreamers will find the global leaderboards pre-populated with hundreds of creations to sample. My first hour of exploration led me through lavish recreations of the Red Room from Twin Peaks, across an icy tundra, and into colorful cosmic landscapes.

“Surfing” was a great word choice for this mode, as the pick-up-and-play nature of each creation requires little-to-no investment but could still yield a rewarding experience.

Though it sounds like this could easily become a ruthless landscape of rampant self-promotion, the developers have done an excellent job putting up silos to help navigate the wide world of players’ imagination.

You can search and click into an individual tag (such as Horror) and see what else has been made. Or, you may want to dive into the Developer-approved playlists that highlight innovative mechanics or features. Likewise, what’s popular also rises to the front of the menu and finds its way to prominence.

When you want to dive in and start building your own creations, Dreams is ready. The various menus and mechanics used to create an individual scene can be incredibly overwhelming, but the game’s tutorials are great at coaching you through every individual step along the way. You won’t be starting with the most masterful or original piece of art, but just going through the motions of navigating a complex toolbar and making something that works can feel groundbreaking.

The best part about Dreams’ tutorials is the way in which they aren’t built just for players to check off. Along the way, they track and correct how you play, correcting you on certain button presses and helping guide you toward more accessible and responsive control schemes. The game itself wants creation to be as seamless as possible, and friendly text popups along the way help keep you on the right track.

I really felt like I was learning Dreams’ language as I went through these introductory “missions,” and though I’m far from an expert, I’ve already done things I didn’t think I would be able to about a week ago.

Despite my surprise and delight with how the game presents itself, I can’t shake the feeling that the entire future of Dreams is up in the air. It is at once a social platform, an entertainment network, an independent storefront and a creative exercise in and of itself. There is a world where Dreams could revolutionize game development as a whole. For some people, I am sure it will. This release could be a monumental point of inspiration for many, but the question is: To what scale will it break through?

Dreams could become a playspace with which the most tech-savvy creators online remake and spoof other games, movies, and media. It may also be home to more meaty, original experiences like “Art’s Story.” And although this is the “proper” release, it can’t help feeling like players are still getting on at the ground floor of an ambitious, idealized project.

The value each individual will find in Dreams will be personal. For me, I admire the style and polish of what Media Molecule has put together across every character, menu, and music cue. The world of Dreams is a vibrant fantasy, a psychedelic space bubbling with neon-flavored ambience. Likewise, they’ve put in the work to build a bustling community of creators who lift one another up (which is easier said than done). It currently does a great job of crediting each and every creator who touches a project, all the heroes of the collaborative process along the way.

The problem is that I have yet to find that moment that makes the overall experience click. For every novel idea, there’s a frustrating disconnect or another roadblock. Dreams is a game that’s full of terms and verbs and proper nouns, and keeping them all straight makes what should be a free-flowing process feel like cross-referencing a spreadsheet.

Most of the things I’ve found on Dreams haven’t made me fall in love, either. At best, I marvel at just how they were brought into being, but nothing has been able to hold my attention for longer than a few minutes of curiosity.

I have to wonder if things like the Fallout 4 re-creation that’s currently trending will ultimately dominate a large swath of the game’s appeal—to see properties and characters you already love recreated in the Dreams engine. It calls back to something like Minecraft, which rose to prominence with large-scale re-creations of locations from entertainment properties like Game of Thrones and Star Trek.

Anyone who approaches the game today should understand what they’re signing up for. What you pay for now is a two-hour average platforming campaign that looks great, several brilliantly realized tutorial videos, and access to a swath of user-created content.

I do recognize the promise of Dreams. It has lofty goals, and I want to believe Media Molecule has the tools in place to fulfill their vision. But the appeal of Dreams is long-term, and it’s impossible to predict.

As it stands, Dreams is an interesting experiment. It’s encouraging to imagine the world in which this game revolutionized an industry and opens the doors to more freedom for creative expression. Until then, it is only that: a dream.

Dreams is available now on PlayStation 4. This review was written based on a version of the game provided by the publisher.