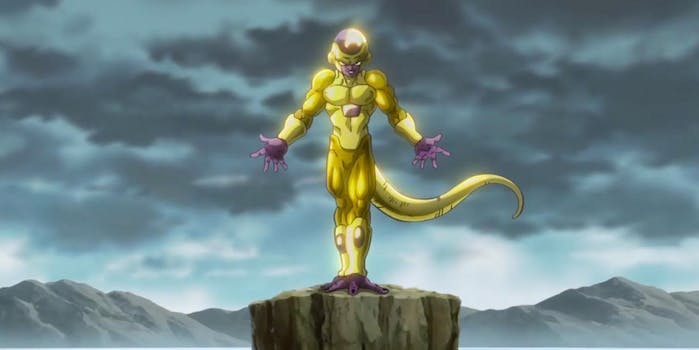 Frieza shows off a new form in latest movie trailer.

A new trailer for the upcoming movie Dragon Ball Z: Fukkatsu no F is causing a bit of a stir in the anime’s fanbase. Last year fans learned that the classic villain Frieza would be returning in the film, and now the latest trailer offers a look at his new form.

Here Frieza is shown sporting purple and gold compared to his old white and purple appearance. According to Kotaku, the form is being called “golden Frieza” and has received mixed responses since its debut.

Trunks: Frieza!
Narrator: At last, the emperor returns.
Narrator: He has but one goal: revenge against Son Goku.
Frieza: Now, shall we begin?
Frieza: Allow me to show you how further evolved I have become.
Frieza: Now, let us continue with my revenge.
Goku: Frieza!
Frieza: Vegeta, I offer you the highest command in my army.
Narrator: What cruelty lies at the end of this heroic battle?
Beerus: He imitated your naivete. It is the end for you.

Fans took to Twitter to weigh in on “golden Frieza” with some enjoying the look, some hating it, and still others mocking the color change by referring to the viral #TheDress color debate.

The new frieza form is alright… I guess :/

The new Frieza is actually blue and black

Beyond Frieza, fans in general seem to be looking forward to another Dragon Ball Z film.

Fans will be able to catch Frieza’s new form in action when the movie premieres in Japan on April 18.