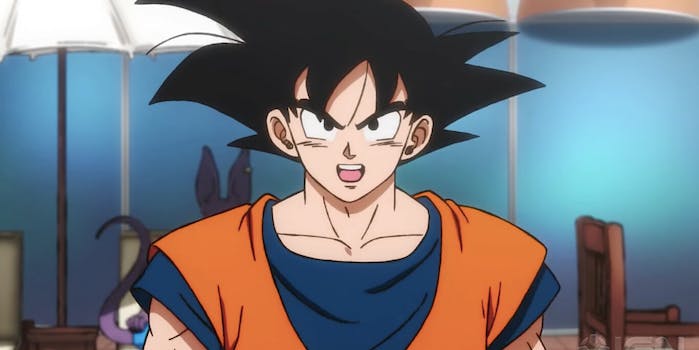 Twitter loves the latest anime movie in the 'Dragon Ball' franchise that's made a fan-fueled splash in theaters.

Dragon Ball Z was a huge part of my childhood in the late ‘80s and early ‘90s. The Japanese anime series was funny and featured wild science fiction. I still wish those tiny capsules used to carry around vehicles, houses, or provisions in compact form someday get invented in the real world. Goku’s Kamehameha will always be my favorite power—and my brothers and I had countless debates over the strongest Super Saiyan.

So it brought on a wave of nostalgia when Dragon Ball Super: Broly trended on Twitter during its Wednesday opening in the U.S. The 20th film in the anime franchise had an impressive domestic box office haul of over $5 million in 1,260 theaters, including 56 Imax and 180 digital PLF screens just for the day, Deadline Hollywood reports. According to the website’s industry sources, estimates are pegged at over $11 million for a six-day run, “given the fanboy nature of the film.”

Indeed, the Funimation Films anime’s super opening day could be credited to its appeal to a wide range of audiences, from kids who enjoy animated movies in general to adult fans of the original anime series. (Even hip-hop artists, from B.o.B to Soulja Boy, love Dragon Ball Z, the Daily Dot found.)

Broly is based on the original story, screenplay, and character designs of Akira Toriyama, making it the first new storyline by the series creator in over 18 years. The film juggles time periods and tells the origins of Broly, Vegeta, and Goku.

Reviews for the English-dubbed Japanese anime have been mostly positive, with Rotten Tomatoes giving it a fresh 83 percent rating from critics and a 91 percent audience score so far. “Dragon Ball Super: Broly is the most action-packed film in the series history. Period,” Phillip Martinez declares on Newsweek.

Paste magazine’s Toussaint Egan says Broly delivers “a visually packed and unabashedly enjoyable experience … Thirty years after its debut, it’s seldom been a more exciting or opportune time to give the Dragon Ball series a chance.”

If you haven’t watched Dragon Ball since childhood and are wondering who Broly is, he’s a wild Saiyan warrior whose power is unlike any we’ve seen so far, yet “provides a perfect road map to Super Saiyan 4 finally becoming part of official canon!” explains Comicbook.com.

The reviewers’ enthusiasm is echoed by fans who flocked to theaters Wednesday and posted jubilant reactions to the movie.

BROLY MOVIE DUBBED IS SOME AMAZING SHIT! AT LEAST A 9/10. pic.twitter.com/TZtyzvyJMG

Y'all I'm about to make some MASS tweets because FR FR THE BROLY MOVIE IS ONE OF THE BEST MOVIES I'VE EVER SEEN IN MY ENTIRE LIFE. I was gonna go super saiyan in the theater but honestly I didn't want to hurt anyone so I had to keep my power on the dl

Forbes reports Broly made over $18 million in just 11 days and rose to No. 1at the Japanese box office. Fox International, which is releasing the film overseas, reveals that it’s amassed $57.6 million from 17 territories so far.

Reviewers have pointed out that Broly creates a wealth of potential for the series to mine moving forward. Given fans’ reactions and box office returns here’s hoping a sequel lands faster than Goku can say “Kamehame Wave!”