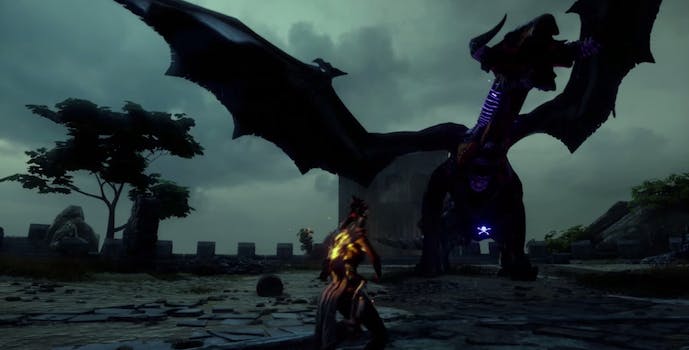 The punishingly difficult co-op multiplayer was training for the real fight.

You have to pay absolutely nothing to add some of Dragon Age: Inquisition’s gigantic dragons into your multiplayer experience, in the new Dragonslayer DLC released today.

BioWare has been good about supporting the cooperative multiplayer mode for Inquisition with free updates. The first multiplayer DLC released in December expanded the number of routes in and added random beast encounters to the multiplayer mode’s trio of dungeons. Today’s update introduces a fourth dungeon, the ability to fight dragons in said dungeon, and three new characters.

Fighting high dragons in Inquisition at any appreciable level of difficulty is serious business. They are huge and will wipe out a party in minutes. Battles may be paused in the single-player mode, which allows Inquisition players to take a timeout and plan strategy in the middle of an attempt to slay a dragon. The multiplayer mode offers no such respite.

Dragons in the multiplayer mode are only available on the new map, Ferelden Castle, and players don’t get to fight the dragon by default. Summoning a dragon requires crafting an item called the Dragon’s Call hammer, which is a one-time-use item. Gathering crafting materials in the multiplayer mode can take some effort, so casual players returning to Inquisition specifically for the Dragonslayer DLC may have to grind out some gear to break down for the raw materials needed to craft the Dragon’s Call.

The Dragonslayer DLC is available for the PC, PlayStation 3, PlayStation 4, Xbox 360, and Xbox One versions of Dragon Age: Inquisition.