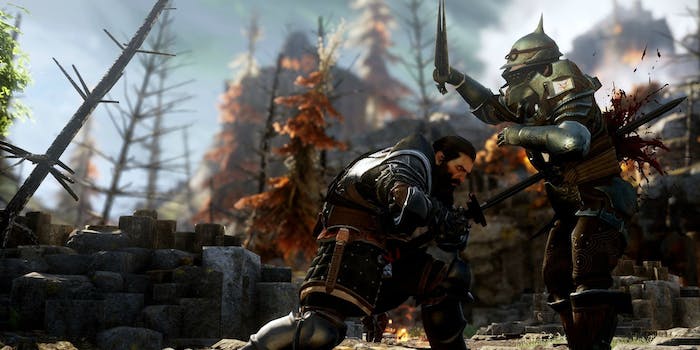 Over the last few months we’ve been impressed by what Bioware has revealed about its upcoming role-playing game Dragon Age: Inquisition. Between four-player co-op and an amazing character customization system, it makes us wish they had released the game on time this week instead of delaying its launch until November.

Despite a wait until the official release, we were able to get our hands on a demo of the upcoming RPG at Electronic Arts’ Naughty or Nice pre-holiday event in New York City on Wednesday. The event showcased quite a few of EA’s upcoming games and current releases, including NBA Live 15, The Sims 4, and a collection of mobile games like Rescue Quest and Peggle Blast. It was Inquisition, though, that inspired the most excitement.

Before the hands-on demo, we watched a 30-minute presentation on the area we’d be allowed to play in. This was the same area shown at Gamescom in August. Known as the Fallow Mire, it’s an optional location in the game that you don’t have to visit to progress in the main storyline, but it gives you the opportunity to increase the inquisition’s influence and open up other opportunities. The goal of the mission is to rescue some of the inquisition’s soldiers who have been captured.

During the demo, I played as a female human warrior with a two-handed weapon. The Fallow Mire is apparently one of the smallest areas in the game, but it doesn’t feel like it. There’s a lot of room to wander off the path and plenty to do, from killing undead to triggering ruins. It may be the smallest area, but it feels like you could spend hours making sure you didn’t miss any loot or sidequests.

After 10 to 15 minutes of playing the demo, the controls became pretty intuitive and easy to remember. Navigation was also pretty simple, thanks to a small map you can follow on the lower left portion of your screen. It includes a mark for your ultimate mission goal and access to a much larger quest map in the menu.

Combat was what I was most eager to see, because it’s been described as a combination of the two systems from Dragon Age: Origins and Dragon Age 2. In my four-person party were Blackwall, Solas, and Cole, allowing me to switch between characters and get a sense for some of the other classes (Cole is a rogue and Solas a mage). I was skeptical at first, but in the demo it appears they’ve succeeded in this type of combined combat. The return of the tactical camera was welcome, and provides you with a distinct advantage when facing your enemies, especially if you’re still far enough away that they haven’t engaged you yet. By going into the tactical view you can see stats on your enemy, their vulnerabilities, and what they are immune to. This allows you to do quite a bit of combat planning. You can then assign attacks to your party.

Perhaps the most interesting aspect of the tactical camera was that once you assign attacks, instead of going back to full-speed combat you can choose to slow things down, letting you see how your assignments play out. Then you can assign your next series of attacks. It’s an interesting way to view combat and a useful tool when you’re facing a lot of enemies that can overwhelm you quickly if you went back to full-speed. Of course if you want to go back to full-speed it’s easy to do. Outside of tactical view the combat feels very much like it did in Dragon Age 2.

All of this being said, I was disappointed with two aspects of the demo. The first is the fact that you can’t sprint or move any faster than your character’s usual jog. While this wasn’t an option in Dragon Age 2 either, sprinting was always present in the Mass Effect series and I enjoyed the forever-sprint ability in Mass Effect 3. I was hoping to see some sort of faster movement option here—there’s a lot of ground to cover in the open world. As I rushed directly to rescue my soldiers toward the end, I felt like it took too long for my character to get from one point to another. Perhaps even more disappointing was learning that sprinting will probably be available in multiplayer, but in single player that controller button was instead assigned to highlighting items you can pick-up and interact with. Frankly, I would prefer the sprint ability in single player, but at least we’ll be able to move faster movement in one form of the game.

I was also hoping to see some interactions with followers when out on missions. I tried to engage them out of combat, but nothing happened. I didn’t even get a “Wait until we’re back at camp!” response. I’m told you will be able to interact and get this type of response from followers in certain areas of the game. Followers will also sometimes have information about the area to share, but unfortunately I wasn’t able to see that here.

Overall though, my short hands-on with the game did show Bioware has listened to feedback from fans, especially when it comes to combat. I was impressed by how well the combined system worked, and I look forward to spending hours exploring the new, more open world of Thedas.