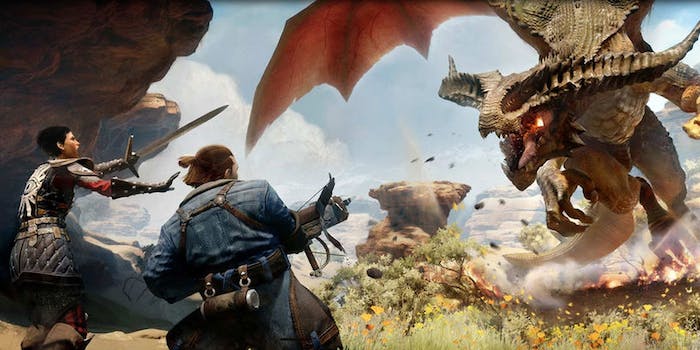 Dragon Age: Inquisition may give fans everything they want

Looks like BioWare learned from its Dragon Age 2 mistakes.

BioWare is really good about listening to their fans. And it sounds like the developer listened to just about everyone who was ticked off with the weak story and action-based combat of their of the second game in their Dragon Age series.

The Dragon Age RPG franchise inspires such passions among fans because it plays to deep-rooted loves and deeply needed diversity. Dragon Age: Origins harkened back to the meaty role playing games that frequent the PC gaming domain. It also allowed for gay and bisexual characters, if players chose to depict their hero as either, which is almost unheard of in gaming.

Dragon Age 2 was far less sprawling in terms of the map and varied locations, and had an ending which didn’t please some fans.

BioWare showed it was willing to admit shortcomings and serve its audience by addressing a weak ending to Mass Effect 3 with a free, downloadable extended cut. It seems as though BioWare has similarly addressed fan feedback with the design of Inquisition.

We knew from earlier reveals that the combat system in Dragon Age: Inquisition is a blending of the previous two games. Players can mix and match during battle between a third person action viewpoint with kinesthetic combat a la Dragon Age 2, and pause the game and issue orders to individual party members as in Dragon Age: Origins.

A thorough playthrough of a huge RPG like Fallout 3 could reasonably take up to 100 hours. BioWare just dropped a very big number.