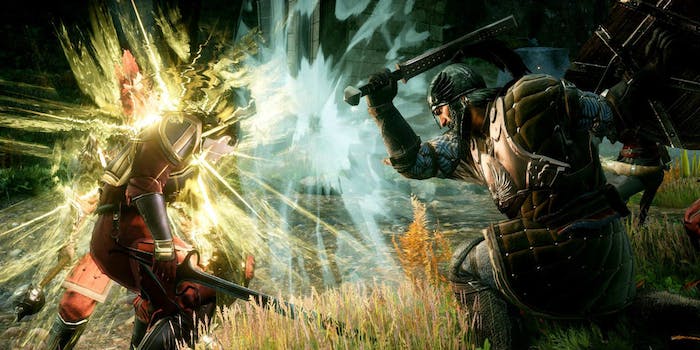 There won’t be anymore Dragon Age: Inquisition updates for Xbox 360 and PS3

The death knell of the seventh generation consoles continues.

Even though Dragon Age: Inquisition was released on PlayStation 3 and Xbox 360, those consoles have seen the end of fresh Dragon Age content.

The release of games only on the PlayStation 4 and Xbox One—Dying Light, Evolve, The Witcher 3: Wild Hunt, and Batman: Arkham Knight being some of 2015’s high profile examples—mark the beginning of the end for development on the PS 3 and Xbox 360.

Games like Destiny and Grand Theft Auto V continue to support both the current and previous generation of consoles, and they also include save imports to transfer characters from the PS3 and Xbox 360 to the PS 4 and Xbox One versions.

That BioWare is offering a Save Importer is therefore not surprising. Essentially making the save transfer mandatory for anyone who wants access fresh content when the game was released cross-generation, however, is surprising. Then again, triple-A game developers eventually get tired of dealing with hardware limitations they no longer need to deal with and limit the nature and scope of their work accordingly.

Perhaps this announcement by BioWare portends the development of Dragon Age: Inquisition content that far outshines everything released thus far. That at least might salve the irritation of Dragon Age fans who now have to either shell out $350 to upgrade to a Xbox One or $400 for PlayStation 4, or call their Dragon Age adventures finished.

The Save Importer will transfer both single player and multiplayer progress from seventh to eighth generation versions of Dragon Age: Inquisition. Players may only import up to 99 units of platinum, the premium multiplayer currency purchased using real world money during a Save Importer transfer. Spend yourself down to that amount or less before making the transfer, or you’ll lose the platinum that’s left over.