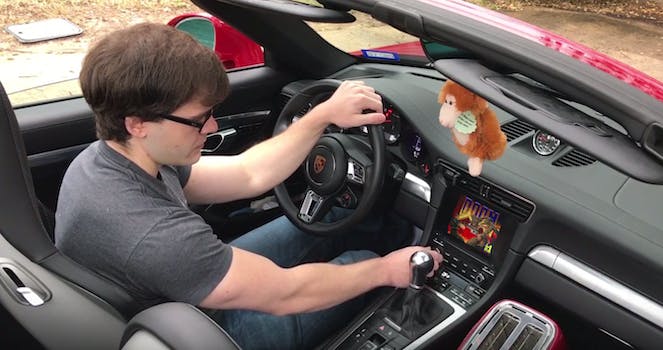 Shoot demons in the face using your steering wheel.

Doom revolutionized the first-person shooter genre in 1993, showcasing a new future for video games. Since release, the game has been modified so much that it can now run on an astounding number of devices, both intended to support video games and not.

YouTube user vexal may have found the most absurd piece of technology that can run Doom yet. A new video uploaded to vexal’s channel shows the game on the dashboard console of a 2017 Porsche 911 Carrera S Cabriolet.

Vexal walks viewers through the “three easy steps”  it takes to get Doom running on similar car models. A flash drive containing the car’s VIN number will put the system into debug mode once the car turns on, allowing a disc containing the game to run. The unfortunate part? The game is controlled using the steering wheel and honking the horn.

The video was filmed on private property, because it’s obviously dangerous to play a demanding video game while driving. While it might be an impressive technical feat to see Doom running on a sports car’s console computer, the practical uses are almost nonexistent.