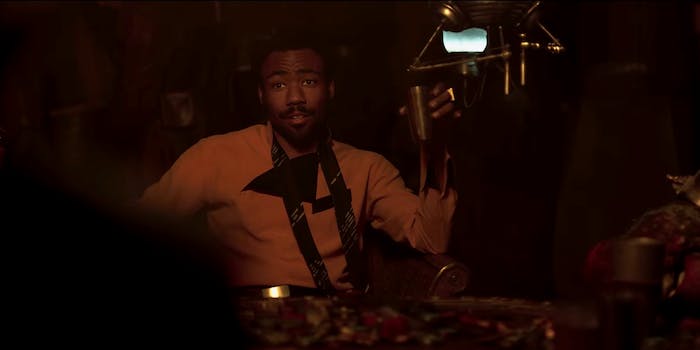 Being cast in a project like Solo: A Star Wars Story is probably daunting for anyone, but one of its stars had a very relatable response to it.

In the newest episode of the Star Wars Show, Alden Ehrenreich and Donald Glover sat down with Andi Gutierrez to chat about Solo: A Star Wars Movie. It’s pretty light on plot details, but Ehrenreich and Glover talked about their initial reactions to being cast as Han Solo and Lando Calrissian, respectively, and where they drew their inspirations. (The interview starts around the 2:49 mark.) While Ehrenreich’s reaction involved a lot of words he couldn’t say on a family-friendly show and experiencing the silence upon telling family and friends. One of Glover’s initial responses was about as far from that—and straight to the source—as you could get.

“The day I found out I got it, I remember, I bought, like, a whole pizza and went home and watched Empire Strikes Back,” Glover said. “That was definitely the beginning, but then I just watched a bunch of other cool ’70s, stuff that I thought would be like his kind of style.”

Although most of us will never end up in a Star Wars movie, Glover’s response—a self-date night with a pizza and Empire Strikes Back—does sound very tempting right about now to get into a good mindset for Solo and Lando’s first cinematic turn.