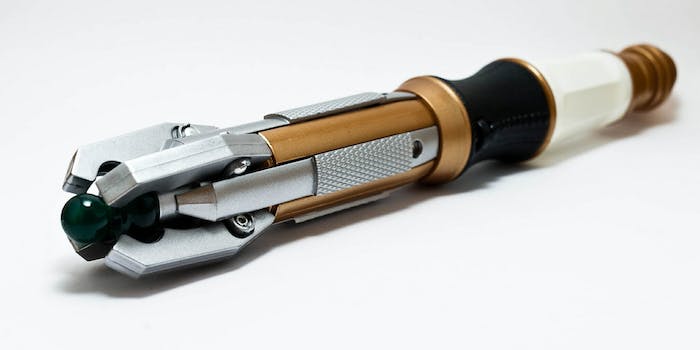 The sonic screwdriver has been replaced, and ‘Doctor Who’ fans aren’t happy

The most recent season of Doctor Who kicked off last week, and already there’s trouble on the horizon. This time, the cause isn’t an invading Dalek, but the decision of showrunner Steven Moffat to have our favorite time traveler abandon his legendary sonic screwdriver in favor of wearable tech: a pair of “sonic sunglasses.”

Here’s the switch, as the Twelfth Doctor, played by Peter Capaldi, decides he’d rather opt for a device that doesn’t “ruin the line of his jacket”—namely a pair of Ray-Bans.

Capaldi explained that the sunglasses were “an adjunct to the screwdriver” rather than a replacement.

“The Sonic Sunglasses are an adjunct to the Sonic Screwdriver and have arrived because the Doctor likes Ray-Bans! You press them and they go zzzzz and they do great things.”

Modern Whovians have often complained about the way the screwdriver has become a kind of catch-all deus ex machina in recent years, used to get the Doctor out of any and every kind of dilemma.

Still, fans don’t like it when you take away their toys—especially when those toys have been part of their favorite canon for generations. Capaldi chose to go full ’90s with the Ray-Bans and the “aging rocker” look didn’t help. Neither did Moffat’s cheeky explanation—that “sometimes you have to embrace the heresy”—didn’t help, even though he also says the screwdriver will probably return “someday.”

But fans weren’t convinced, even though the screwdriver is only one of many “sonic” devices that the show has used over the years, and even though it’s been off the show for numerous time periods, most notably when the Fifth Doctor lost his in the ’80s and it didn’t show up again until the 1996 movie.

Currently a petition to get rid of both the sonic sunglasses and the sonic screwdriver has 1,600 supporters. But most fans just want their favorite tool back in the doctor’s kit:

It is PART of the WHONIVERSE, #bringbackthescrewdriver Even the War Doctor had one! #Whovian #whovians pic.twitter.com/xkjCmwCcY5

It’s most likely the change is only temporary. But ultimately all this probably isn’t so much about the screwdriver itself as Moffat’s dictum that sometimes the creative team wants to do things just “to show that we can.” One does not simply mess with decades of Doctor Who canon, even if one is the showrunner and current arbiter of that canon.