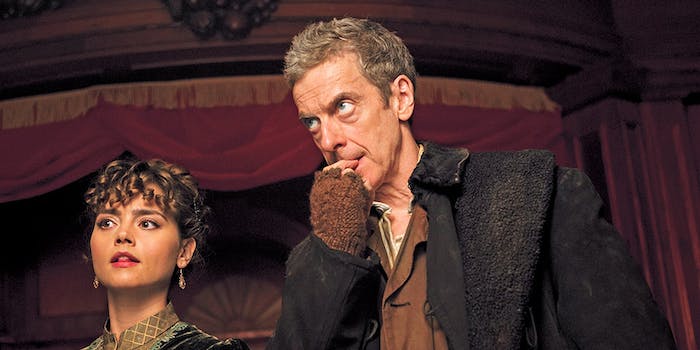 Thankfully we have a new trailer to keep us happy.

The leaked episode is a black and white rough edit of “Deep Breath,” Peter Capaldi’s first full episode in the show’s title role. The scripts and video are thought to have originated from the BBC’s Latin America headquarters in Miami, as the new season will be premiering simultaneously around the world on August 23.

Since five other video files were spotted online (although apparently deleted before they were shared) at the time of the first script leak, it’s possible that several other episodes may also make their way online before their official airdates. This is an embarrassing situation for the BBC, which has a long history of attempting and then failing to keep a lid on Doctor Who spoilers.

A spokesperson from BBC Worldwide told the Radio Times, “This is part of BBC Worldwide’s ongoing security investigation into leaked unfinished Doctor Who materials. This content is currently being removed and originates from the same Miami server we disabled last week, it is not a new issue.”

The BBC is urging fans not to watch the leaked video, which is unfinished and (obviously) will spoil viewers for the real season premiere. Doctor Who writer Mark Gatiss tweeted the #keepmespoilerfree hashtag, which has since been taken up by other Whovians. On the whole, most fans really don’t want to watch a pirate copy of a rough edit when they can just wait a month for the real thing, special effects and all. After all, this isn’t Sherlock, which only puts out three episodes every two years.

The BBC also revealed the first “real” trailer for the upcoming season, which unlike recent teaser trailers, actually includes proper dialogue and some clips from scenes between the new Doctor and his companion Clara.

The “Where are we going?” “Into darkness,” exchange seems like a strange choice, since it brings to mind Star Trek: Into Darkness, a film that had a distinctly mixed reception from Doctor Who’s target audience of sci-fi fans. Still, hopefully this trailer will contain enough new information to discourage more people from seeking out the leaked episode, which is highly unlikely to measure up to the real thing.