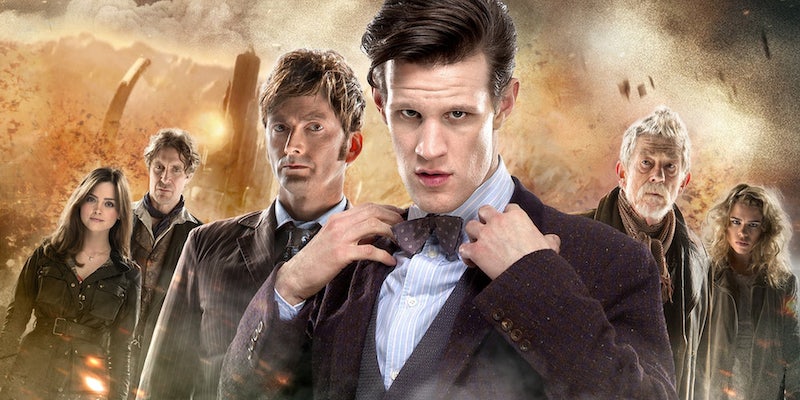 Guess how many female writers are joining ‘Doctor Who’ this season

With another all-male crew, will the show continue down its conversvative and arguably sexist path?

It’s technically summer now, so that means it’s time for the BBC to ramp up its teasers for this year’s new season of Doctor Who.

Season 8 will star twelfth Doctor Peter Capaldi, and began filming earlier this year. The BBC is keeping a pretty tight lid on spoilers, but we do now know who wrote most of the upcoming episodes. Established Who screenwriters Mark Gatiss, Phil Ford, Stephen Thompson and Gareth Roberts are all coming back to write more episodes, and on Wednesday two new writers were announced: Jamie Mathieson and Peter Harness.

Well. I’ve been desperate to say this since 1979… I’m writing an episode of Doctor Who!!!

I am writing for DOCTOR WHO! https://t.co/reEoKAVeKM

Mathieson previously wrote a movie called Frequently Asked Questions About Time Travel (an appropriate choice for Doctor Who), and several episodes of BBC urban fantasy show Being Human. Harness is a playwright who has also written episodes for various British TV shows including Wallander and the upcoming adaptation of the fantasy novel Jonathan Strange and Mr Norrell.

This now means that eight of the thirteen upcoming episodes are accounted for, with other possible writers including Doctor Who alums Neil Cross, Chris Chibnall, and Neil Gaiman. It looks like showrunner Steven Moffat is putting the eighth season in the trustworthy hands of writers who either know the show inside out, or have experience writing similar material for British audiences.

However (and yes, you probably knew a “however” was coming if you were paying attention to that list of writers), this is now the fourth season in a row that has employed precisely zero female writers.

In fact, since Steven Moffat took over as showrunner in 2009 he has never hired a single female writer. And only once has he brought on a female director, back in season five. Needless to say, this track record only adds fuel to the ever-growing number of fans who say Moffat is taking Doctor Who in a more conservative and sexist direction.

This all-male list of writers is partly down to Moffat’s obvious lack of interest in actively recruiting more women, but also partly down to the way BBC dramas are run. Instead of a more collaborative writers’ room set-up, the screenwriters for a show like Doctor Who are effectively freelancers who are hired by the showrunner. This means that Moffat tends to go back to people he knows he can trust to submit a decent episode, like Chris Chibnall or Mark Gatiss (who also co-writers Sherlock).

“New” writers are typically recruited from BBC shows with a similar audience, like Being Human. Moffat’s predecessor Russell T. Davies generally had a far wider pool of writers to work with, helped along by the fact that Doctor Who spinoffs Torchwood and The Sarah Jane Adventures were running at the same time. Basically, Davies could either test or train up less experienced writers on those shows, before giving them an episode on Who.

Historically, Doctor Who has been a socially progressive show. That’s surely why so many viewers have singled out Steven Moffat for hiring such a vast number of white, male writers while female characters kept turning into flirty sidekicks and the number of non-white characters plummeted. The most popular explanation is that the vast majority of British science fiction TV writers are white men, and only the cream of that crop can be hired to work for the BBC’s flagship show.

This explanation doesn’t hold up when you consider the number of unavoidably bad episodes that were written by the show’s existing (male) writers. And besides, other successful British sci-fi/fantasy shows like Being Human, Torchwood and Merlin have all hired women to write multiple episodes in the past, and that never seemed to do them any harm.

Based on a glance of their previous work, it looks like the two new Doctor Who writers will make a great addition to the group of established writers working on season 8. Whether or not it matters that all of those writers are men is more a matter of opinion. Doctor Who’s ratings are still pretty good, so from an “If it ain’t broke, don’t fix it” perspective, there’s no financial reason to hire anyone other than Moffat’s tried-and-true formula of middle-aged white guys.

The question is, does Doctor Who have a duty to represent its audience and continue to break boundaries in the world of science fiction TV?

Back in the 1960s, at a time when vanishingly few women were working in television at all, the show’s first seasons were shaped by Verity Lambert. For the next 40 years, Doctor Who had its ups and downs, but it always pressed forward towards the future, with Russell T. Davies’ 21st century reboot introducing a far more racially diverse cast than ever before, as well as LGBT characters including Captain Jack Harkness.

For a show whose success was built on a rebellious attitude towards the sci-fi establishment, why go back to hiring exclusively from the Boys’ Club?