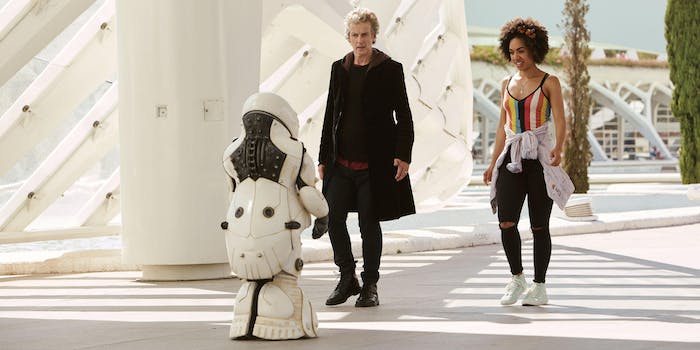 Season 10 corrects the most common criticisms aimed at Moffat-era 'Doctor Who.

After two or three seasons in the doldrums, Doctor Who is good again. Like, seriously good.

Steven Moffat‘s tenure as showrunner has been patchy, to say the least. He wrote some iconic episodes, but he’s a divisive figure due to his frequent sexist comments and troubling attitude toward female characters. Clara barely had a personality during her first season on the show, and her role involved weird running jokes about her gender, appearance, and potential attraction to the Doctor. On top of that, we had to slog through dozens of attention-grabbing plot twists that didn’t always make sense in hindsight.

But, just to reiterate: Doctor Who is good now.

Whatever happened at the BBC between seasons 9 and 10, it made a huge difference. With the exception of a fat joke in episode 1, this season avoids the usual criticisms aimed at Moffat-era Doctor Who. The female characters are well-written, each episode has a distinct emotional/political message, and there’s a thoughtful structure to the developing relationship between Bill Potts and the Doctor. And the casting is noticeably more diverse, beginning with the introduction of Bill as the show’s first openly gay lead.

How Bill Potts transformed ‘Doctor Who’

There’s a marked difference between Bill and Clara’s character development, rooted in what we see of their personal lives. Clara began as a mystery the Doctor wanted to solve, while Bill is basically the opposite. Her first episode dives straight into her personal life—she’s gay, she’s adopted, she works in a university canteen—and the show develops a refreshingly relaxed relationship between her and the Doctor. Instead of starting with an intense emotional bond, they’re more like a Doctor/companion partnership from vintage Who. He’s straightforwardly excited to show Bill the universe, and she views him as a mentor.

Each episode explores a new facet of their relationship. In “Smile,” Bill learns about the Doctor’s semi-official career as an intergalactic hero. In “Thin Ice,” she discovers his darker side and solidifies her role as his moral advisor. In “Knock Knock,” the fourth and most recent episode, she tries to set boundaries in their relationship. They’re all standalone adventures with simple but effective narrative themes, a departure from the overcomplicated stories and apocalyptic foreshadowing of seasons 8 and 9.

It’s a classic soft reboot, dialing back to more intimate topics without getting too lighthearted and frothy. Episode 2 and 3 are fun but intentionally political, tackling slavery and mass migration (“Smile”) and Britain’s racist history (“Thin Ice,” a Regency-era story with an unusually diverse cast.) “Knock Knock” is one of the most relatable companion-led episodes since the Russell T. Davies era, as Bill moves into a new house with five friends.

Each companion has to find their own dynamic with the Doctor, and “Knock Knock” frames the Doctor as Bill’s embarrassing dad. He insists on inspecting her new house (which is, of course, infested with monsters), while Bill tries to distance herself from his weird behavior. She’s concerned with the everyday awkwardness of seeming cool in front of her new friends, and explaining to a flirty guy that she’s only interested in women.

We’re only four episodes into a 12-episode season, but I feel safe to recommend what we’ve seen so far—especially if you, like me, were turned off by the flaws of Moffat-era Doctor Who. It almost feels like a new show, and you can jump in without watching previous seasons.