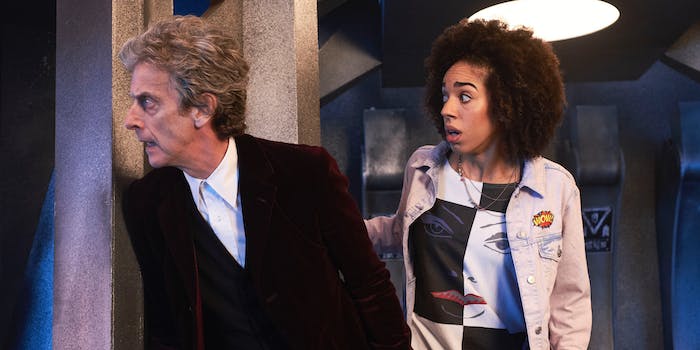 If you recently stopped watching ‘Doctor Who,’ it’s time to tune back in

With such a huge and diverse fanbase, Doctor Who can never please everyone. But even by Doctor Who standards, the last few seasons have been controversial. Showrunner Steven Moffat is frequently criticized for making sexist gaffes, and many recent storylines were downright incoherent.

If you’re one of the fans who decided to quit watching until Moffat leaves next year, I understand where you’re coming from. However, I’d still suggest giving season 10 a chance. The season premiere felt like a return to form, with clever dialogue, a simple yet compelling sci-fi concept, and a lovable new companion with a solid emotional arc. Bill Potts (Pearl Mackie) is dorky and relatable, and her personality already feels more fully-formed than Clara did for her entire first season on the show.

We’re reintroduced to the Doctor (Peter Capaldi), in a new setting, working as a university lecturer in modern-day England. His quirky and passionate lectures are (understandably) very popular among the students, but we discover that his favorite pupil isn’t even enrolled at the university. It’s Bill Potts, a young woman who works in the canteen and attends his classes for fun.

They strike up a unlikely mentor/student relationship, an interesting crossover between the more formal tone of vintage Doctor Who, and Bill’s casual attitude as an analog for season 1’s Rose Tyler. This version of the Doctor is an eccentric academic, while Bill is an underdog with boundless energy, an open mind, and a thirst for knowledge.

We also get a thorough introduction to Bill’s personal life and backstory, something that felt absent from Clara’s seasons on the show. In the space of one episode, we already know that Bill was adopted after the death of her mother, works in a university canteen, and is gay. (She’s also a very snappy dresser.)

Bill’s sexuality is treated equally to the romantic interests of previous (straight) companions. There’s no awkward coming-out scene. Instead we launch straight into a classic style of Who story: Bill has a crush on a girl who gets sucked into an alien liquid, which then “pilots” her body into stalking Bill across the universe. As Bill and the Doctor flee this alien creature, Bill proves herself as a compassionate and insightful companion, and the episode ends neatly with heartfelt emotional moments for both characters.

Over the past two or three seasons, Doctor Who was beset by sloppy writing. Too many episodes felt incoherent, or relied on flashy plot-twists with increasingly high stakes. By contrast, the season 10 premiere set a healthy balance between the show’s key elements. It was family-friendly but not childish, weird but not overcomplicated, and its story was grounded in moral and emotional truth. The only serious problem was a wildly unnecessary fat joke in the first two minutes, which makes Bill seem shallow and judgemental. But if you skip that moment, this was one of the best season premieres we’ve had in years.