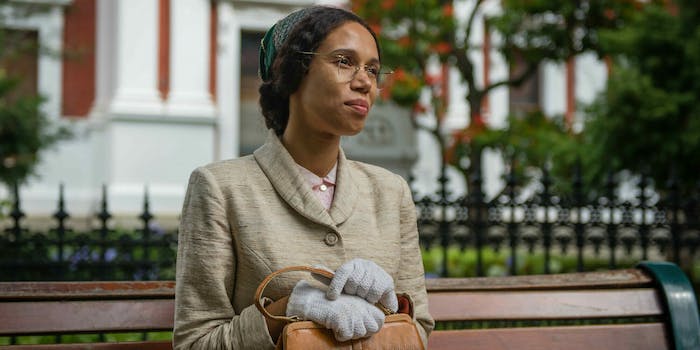 ‘Doctor Who’ sends a powerful message with Rosa Parks episode

This review includes spoilers for “Rosa,” episode 3 of Doctor Who season 11.

Doctor Who has always been political, and this week’s episode sent a very clear message by visiting Montgomery, Alabama, in 1955. Arriving days before a pivotal moment in the Civil Rights movement, the Doctor and her companions discover that another time-traveler is trying to block Rosa Parks (Vinette Robinson) from protesting the city’s segregated bus service. It’s an eye-opening experience for the Doctor’s 21st-century friends, who aren’t prepared for the virulent racism of 1950s Alabama.

Written by Malorie Blackman—best known for the Noughts and Crosses novels, set in a racist dystopia—this episode harked back to the earliest years of Doctor Who, which used time-travel to educate viewers about historical events. In recent seasons a Rosa Parks episode might have sent a shiver of apprehension down the spine, but the story is in good hands here. Instead of going the Transformers route (a franchise whose bizarre Harriet Tubman namedrop invited some uncomfortable questions), “Rosa” shows how a single person can change history—and how there’s still a long way to go in the fight against racism.

While the Doctor’s friends Ryan and Yaz, a Black man and a British Asian woman, are shocked by their reception in the 1950s, one of their most memorable scenes is a conversation about modern-day racism. Ryan is well-acquainted with police profiling, while Yaz recounts being called a terrorist on the way to the mosque. As Doctor Who’s first nonwhite writer, Blackman is noticeably bolder than the show’s usual tone of well-meaning optimism. Perhaps the most telling detail is her choice of secondary antagonist—the main enemy being, of course, structural discrimination.

The time-traveling villain Krasko (Joshua Bowman) is straightforwardly motivated by racism, hoping to stop the Civil Rights movement in its tracks. And since he’s from the distant future, we know that white supremacists still exist centuries from now. This could be interpreted as a pessimistic view of humanity’s future, but it’s entirely in line with the Doctor Who ethos. Terrible people exist on every planet, in every time period, but we always see the Doctor and her companions win out in the end, fuelled by compassion and teamwork. That’s exactly what happens here, with our heroes defeating Krasko while Rosa Parks continues on to fight against segregation.

We know the Doctor will always be on the side of justice and freedom, but she isn’t the hero here. She can’t save the day this time because narratively speaking, that’s an offensive example of the white savior trope. Instead, the show uses her and Graham as a way to model white allyship. Graham is particularly interesting here because while other shows might use the 60-year-old white guy as either the voice of ignorance or the voice of authority, he’s portrayed as naive but outraged by injustice, and (crucially) comfortable with taking a step back. We also learn that his attitude to race has already been vetted by a trustworthy source. Back when they first met, his wife Grace (Ryan’s grandmother, who died in episode 1) brought up Rosa Parks when she found out that Graham was a bus driver. His response evidently passed muster.

Along with a couple of other comments, this cements the idea of Grace as a politically active Black woman with a clear impact on the men in her life. Grace’s influence lasted longer than Ryan’s vague recollection of learning about Rosa Parks in history class, a detail with several layers of meaning. As a 19-year-old living in 21st century England, Ryan knows about everyday racism but doesn’t spend much time thinking about its structural, historical basis—unless his grandmother brings it up, that is. He knows about the U.S. Civil Rights movement through her (which incidentally resulted in the funniest line delivery of the episode: “Thanks, Martin Luther King!”), and his visit to 1950s Alabama makes him appreciate her even more. It also had the unintended consequence of bringing him and Graham closer together, something Grace was hoping to see before she died.

This should be an interesting episode for American viewers, not least because of all those dodgy Alabama accents. Unlike the handful of American (and Americanized) episodes we saw in the last couple of seasons, this one is squarely aimed at British viewers, working from the assumption that many won’t know the Rosa Parks story at all. It also offers an unflinching look at white people’s behavior in segregation-era Alabama, avoiding the Hidden Figures method of adding a white historical character who “did the right thing.” There’s just Rosa, palpably exhausted but still fighting back. The final act is a parable about staying in your lane, with the Doctor realizing that she and her companions must remain on Rosa’s bus if they want history to go the way it should. They must fill their respective places in the segregated sections, forcing Rosa to decide whether to sit down in a white seat. Her protest changes her life forever, while the Doctor and friends are free to leave and return to a safer point in history.