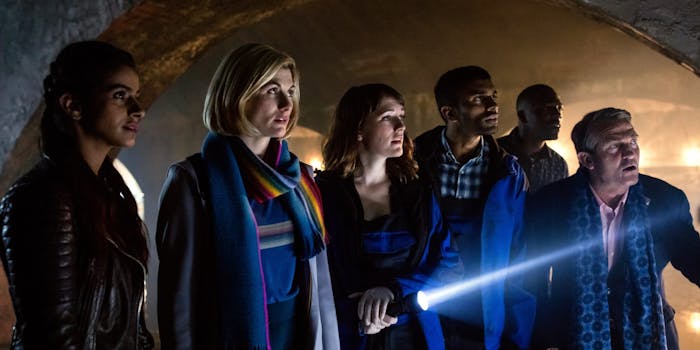 ‘Doctor Who’ rang in the new year with an old foe

It's the first face-off between the Thirteenth Doctor and her most formidable enemy.

With a new Doctor (and her “fam”) at the helm of the TARDIS, Doctor Who’s 11th season reenergized the show with new monsters and standalone adventures. But there’s still something particularly exciting about the resurgence of some of the Doctor’s most iconic and frightening enemies, which came to a head this week with an episode full of spectacle, family ties, and one particularly nasty Dalek.

After skipping its annual Christmas special for the first time in 13 years, Doctor Who arrived on New Year’s Day in full force. While Christmas can often lend itself to some twisted holiday imagery and lean into the more melancholy side—particularly if a Christmas special coincides with the arrival of a new Doctor, which it has over the past few regenerations—the New Year’s effect is more subtle. It can signify the start of a new year, yes, but there’s often a bit more room for reunions, to begin new romances or start to mend something that was once broken. There’s a lot more hope in the world.

And plenty of a sense of wonder within. Yaz, Ryan, and Graham (Mandip Gill, Tosin Cole, and Bradley Walsh) have only been traveling with the Doctor (Jodie Whitaker), so they’re not quite as jaded or cynical after seeing what happens to the people they can’t save or catching glimpses of the Doctor’s darker side as other companions have before them. They’re still just as enthralled with the minutia of time travel like the cosmic fireworks display they’re witnessing from the Doctor’s spaceship. And when someone needs their help, they won’t hesitate—even when it comes to a creature that fills the Doctor with fright.

But all of that hope and optimism quickly comes to a head. More than a thousand years after a battle that led to three strangers dividing their enemy and vowing to take it to the far reaches of the Earth and have their descendants guard it for all time, two archaeologists dig up the remains of the warrior who died before reaching his destination. In his possession is one piece of the enemy that, thanks to exposure from UV light, is revived with an even more fervent drive to finish what he started.

It’s a Dalek, horrific and terrifying in a way we haven’t seen them be in a very long time. It may be more vulnerable without the shell it moves in, but it’s also far more dangerous. It can quickly latch onto someone like Lin (Charlotte Ritchie), one of the archaeologists who excavated the body and then control her every move. This Dalek, a recon Dalek tasked with passing on as much information as it can about Earth, can sabotage the TARDIS from a distance.

And after arriving back in Sheffield, Ryan’s father Aaron (Daniel Adegboyega) showed up wanting to catch up with his son, but Ryan, Graham, and the Doctor were especially unreceptive to the idea at first. (The Doctor aptly reminded Aaron upon their first meeting that he never went to his mother Grace’s funeral.) Ryan, Yaz, Graham, and the Doctor have demonstrated countless times the bond that they’ve formed over the course of the past season, but there’s also strength in the family you make for yourself. Even if you’ve screwed up, Graham argues to Aaron, you can still try to repair it.

It all comes to a head as the Dalek takes over Aaron’s body and threatens to kill him if everyone doesn’t do exactly what it wants. And while everything is resolved a little too quickly at the end of the episode, it gives us excellent performances as well as builds even more onto the layered relationship between Ryan, Aaron, and Graham; the downside to that is that Yaz doesn’t get much to do in this episode.

After a full season of defeating foes of all shapes and sizes, we finally see the extent of the Doctor’s fury unleashed. It’s almost hypnotic as it comes to life, and even if you don’t know the extent of the Doctor’s decades-long history with the Daleks, you know it’s personal. The Dalek—a creature that’s cold, heartless, and has been waiting centuries to execute its plan—knows just how to get under the Doctor’s skin. And Whitaker captures and captivates with those flashes of her former selves rising above the surface.

The episode ends on the similarly hopeful note that it started with. Having had a taste of adventure, Aaron wants to keep his feet firmly planted on Earth, but the beginnings of a reforged relationship are starting to form. There is still excitement from Yaz, Ryan, and Graham about the uncertainty of what will happen next. The year may throw a few curveballs at the Doctor, but with her friends, she can take on just about anything.