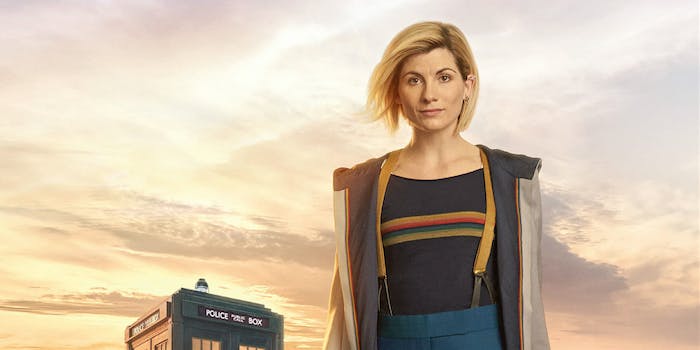 Photo via Doctor Who BBCA/Twitter

Our introduction to the new Doctor on Doctor Who usually comes in threes, though the order may vary a bit. First, the reveal of who’s playing the character. Then, their companion or companions if the previous companion isn’t sticking around. And finally, what outfit they’ll call their own once they settle in. And with just over a month until Jodie Whittaker’s Doctor makes her debut, we now know what she’ll be wearing

The BBC debuted the Thirteenth Doctor’s new outfit on social media Thursday morning with Whittaker front and center. Whittaker is wearing a long coat, high-waisted pants, boots, suspenders, and a navy shirt with a few stripes running across it.

There’s a lot to take in, and like Peter Capaldi’s first outfit as the Doctor, it calls back to some previous Doctors’ outfits. The striped shirt and its coloring call to mind Tom Baker’s iconic scarf while the mashup of colors could be an homage to Colin Baker’s Sixth Doctor. David Tennant’s Tenth Doctor sometimes wore a long coat, but the coloring is closer to the outfit worn by Peter Davison’s Fifth Doctor. Matt Smith’s Eleventh Doctor was a fan of suspenders, although some are attributing that touch to another famous alien.

Yes, this is a very close match of colors, the stripes in her shirt and his scarf.. #DoctorWho #13thDoctor #4thDoctor pic.twitter.com/e5nahyejT8

Both aliens but I didn't expect the new #DoctorWho to channel Robin Williams in Mork and Mindy. #NanuNanu pic.twitter.com/UPtedEJsqA

It's like they tried to incorporate the different shades of Tardis blue into one outfit, I'm impressed #DoctorWho pic.twitter.com/mL7RO9Bx1l

Jodie's outfit actually feels to me like a perfect successor to the 80s Classic Doctor aesthetic!
If she was the (hypothetical) Eighth Doctor in the early 90s, she would have blended in perfectly with the colours and the eclectic style. All she needs is question marks! #DoctorWho pic.twitter.com/ZLoZdH6R9B

Whittaker’s outfit hasn’t been out for long, but fans are already sharing fanart of it, and it probably won’t be too long until we start seeing Thirteenth Doctor cosplay at conventions.

Whittaker will make her Doctor Who debut during the Doctor Who Christmas special on Dec. 25.