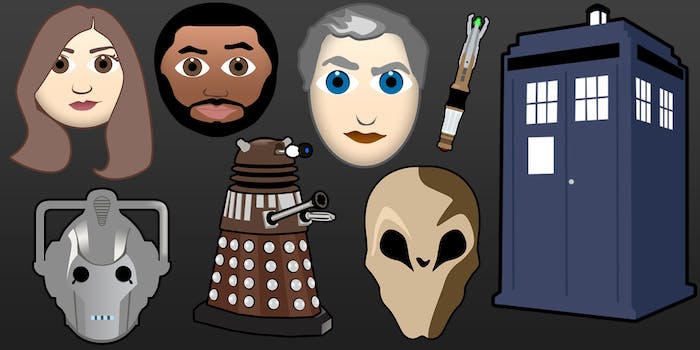 Start your adventure through time and space with ‘Doctor Who’ emoji

Our iPhones failed us, so we've come up with some of our own alternatives for the new season of Doctor Who.

When it comes to traveling all of time and space on the TARDIS, regular text and emoji seem a little outdated.

Emoji are more popular than ever, with one couple texting in only emoji for an entire month and more people making their own emoji with Seinfeld and Game of Thrones characters. We can’t seem to get enough of the symbols and faces, even though we can’t use them on our phones—yet.

The new season of Doctor Who (as well as Peter Capaldi’s debut) is just around the corner. Even with all of the livetweeting and reactionary GIFs sure to come out of each episode, words might not be enough to convey how we’re feeling. Even the emoji currently available on our iPhones seem inadequate. Have you seen the alien emoji? It’s your stereotypical Martian, and not even close to any aliens (even Martians) who’ve appeared on Doctor Who the past 50 years. The rest of them are just as hopeless, so don’t even bother looking.

That’s why we just decided to stop waiting and just make our own proper Doctor Who emoji—or Whomoji for short. There are way too many characters and objects to make enough Whomoji to cover all 50 years of stories, but we think we’ve got enough to get started.

We also have some suggestions for proper Whomoji use, but these are only guidelines. Feel free to channel the Doctor and improvise. (Click here to learn how to actually use these emoji on your iPhone.)

We’re going to miss Matt Smith (and his affinity for fezes), but use his Doctor to convey a sillier and more mischievous side. ;) and :P are overdone, and this can bring a freshness to the conversation.

This is a perfect way to tell someone “I’m on my way.” Are you driving? Walking? Flying? Doesn’t matter. The TARDIS covers them all, even though (as far as we know) it’s highly unlikely you’ll actually travel by TARDIS. (Although we wish we could.)

Have a bit of foot-in-mouth syndrome? You can’t physically take back that stupid thing you might’ve just said, but exterminating it might work just as well.

The Cybermen think that they are superior to every creature, so it’s an excellent way to get the smugness about being right across—especially when it comes to guessing a twist on your favorite TV show.

Did you forget something? It’s not your fault. The Silence was in your line of sight when you agreed to do that thing. (Not applicable for birthdays and anniversaries.)