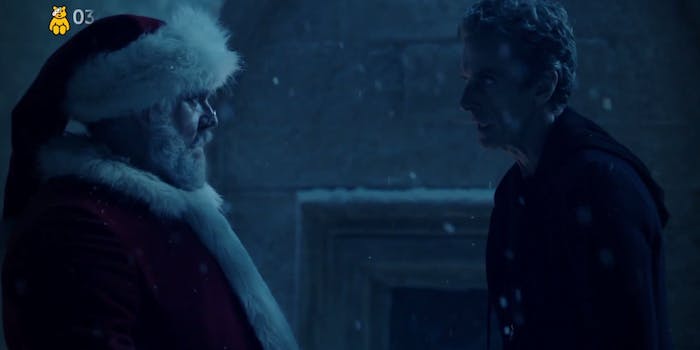 Here’s a peek at the ‘Doctor Who’ Christmas special

Last week’s Doctor Who season finale was a bit of a downer. Death, destruction, friendship breakups, and corpses rising from their graves. This made the final 10 seconds all the more jarring, because they featured an unexpected cameo from Santa Claus.

The annual Doctor Who Christmas special is kind of a bizarre tradition when you think about it. Many fans take Doctor Who very seriously, but one of the most hyped episodes each year is a one-off story that focuses on Christmas cheer, snow, and family-friendly gimmicks. Recent efforts have included Dickensian Christmas themes and evil snowmen, and it looks like this year’s main selling point will be Santa Claus, played by Nick Frost.

The first clip from the episode was revealed by Children In Need on Friday, revealing the fairly obvious spoiler that Clara is back—for the moment, anyway.

Actress Jenna Coleman is rumored to be leaving the series after this episode, but nothing is set in stone. Her earlier appearances in season seven were not particularly well-received, but her character was given more emotional depth in recent episodes. The resulting uptick in popularity may have resulted in Coleman (or showrunner Steven Moffat) changing their minds and deciding to continue with the character for another season or two.

This Christmas special was written by Moffat, and Coleman said in a recent interview, “It’s written in sections and it’s about dreaming—what is real and what is not.” Judging by this clip, it’s safe to assume that Santa himself is one of the things that may turn out to be an illusion. Here’s hoping the episode won’t inspire too many awkward questions from little kids watching with their families on Christmas night.

Photo via BBC Children In Need/YouTube