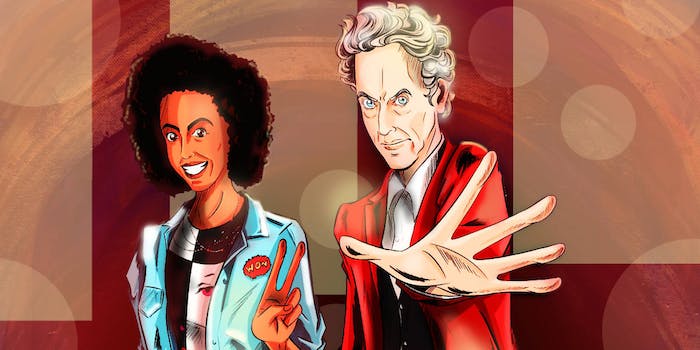 ‘Doctor Who’ fans are already creating fanart of Bill, the newest companion

Everyone loves Pearl Mackie as Bill, and we're totally here for it.

The new Doctor Who companion was announced this weekend, and Whovians are already enamored.

Pearl Mackie, 28, has been cast as Bill, a new character who will join the Doctor for season 10 in 2017. The show’s cast and crew have kept quiet about her role and backstory, but that hasn’t stopped fans from falling in love. Tumblr is already exploding with Bill fanart.

Pearl Mackie debuted as Bill in two-minute scene running away from a Dalek with Peter Capaldi. While fans will have to wait until this year’s Christmas special to see more of the character, we already have a memorable cosplay outfit to work from: Bill’s denim jacket and (strangely coincidental) Prince T-shirt.

Bill’s costume sparked some speculation that she might be from the 1980s, a refreshing change after 10 years of companions from modern-day Britain. The teaser clip also includes a Back to the Future reference, implying that 2017 is Bill’s “future”—although she and the Doctor may just have traveled back in time to the ’80s.

If Doctor Who fandom can produce this much awesome fanart from just two minutes of footage and some photos, we can’t wait to see what will happen once we actually get to meet Bill for real!