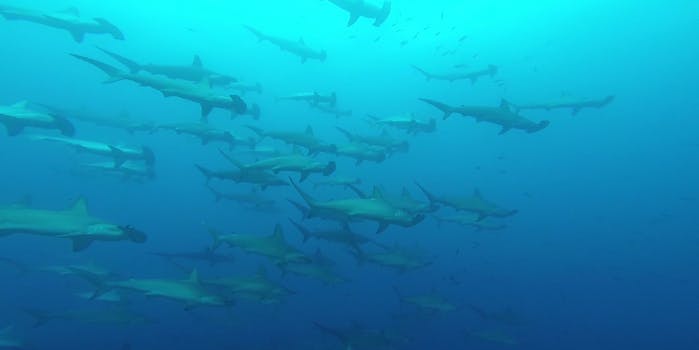 These Galapagos divers were lucky enough to see one rare hammerhead, let alone a massive school

Underwater divers off Galapagos bravely encountered a huge school of hammerhead sharks last week—and luckily for us, they caught the whole thing on video.

The beautiful footage was filmed on a GoPro as part of a special series exploring the Galapagos. The scenic dives actually took place at two separate protected areas of the northwestern Galapagos: Darwin’s Arch and Wolf Island.

The Galapagos islands, where Charles Darwin made his legendary studies about evolution in the wild, make up the world’s second largest marine reserve and were declared a whale and shark sanctuary in 1990.

In addition to the rare scalloped hammerhead shark, which is a globally endangered species, the divers spotted sea lions, stingrays, and Galapagos sharks, a species native to the area.

If you don’t like the annoying background music, we recommend muting and listening to this pleasant underwater ambient mix instead. Sadly, there’s no mix yet to simulate the gargled sound of terror you make as a deadly hammerhead shark swims directly over your head.

While the species may appear populous in Darwin’s Arch, in reality, hammerhead populations have declined by as much as 95 percent throughout the ocean—a fact primarily attributed to the devastating practice of shark finning, which results in the slaughter of 100 million sharks annually.

The shoot is produced by Squid Films and sponsored by a group of scuba instruction institutes and exploration programs. You can also watch the first video in the series, which takes place on land and features some of Galapagos’s famous giant turtles, here.

H/T the Dodo | Screengrab via Vimeo