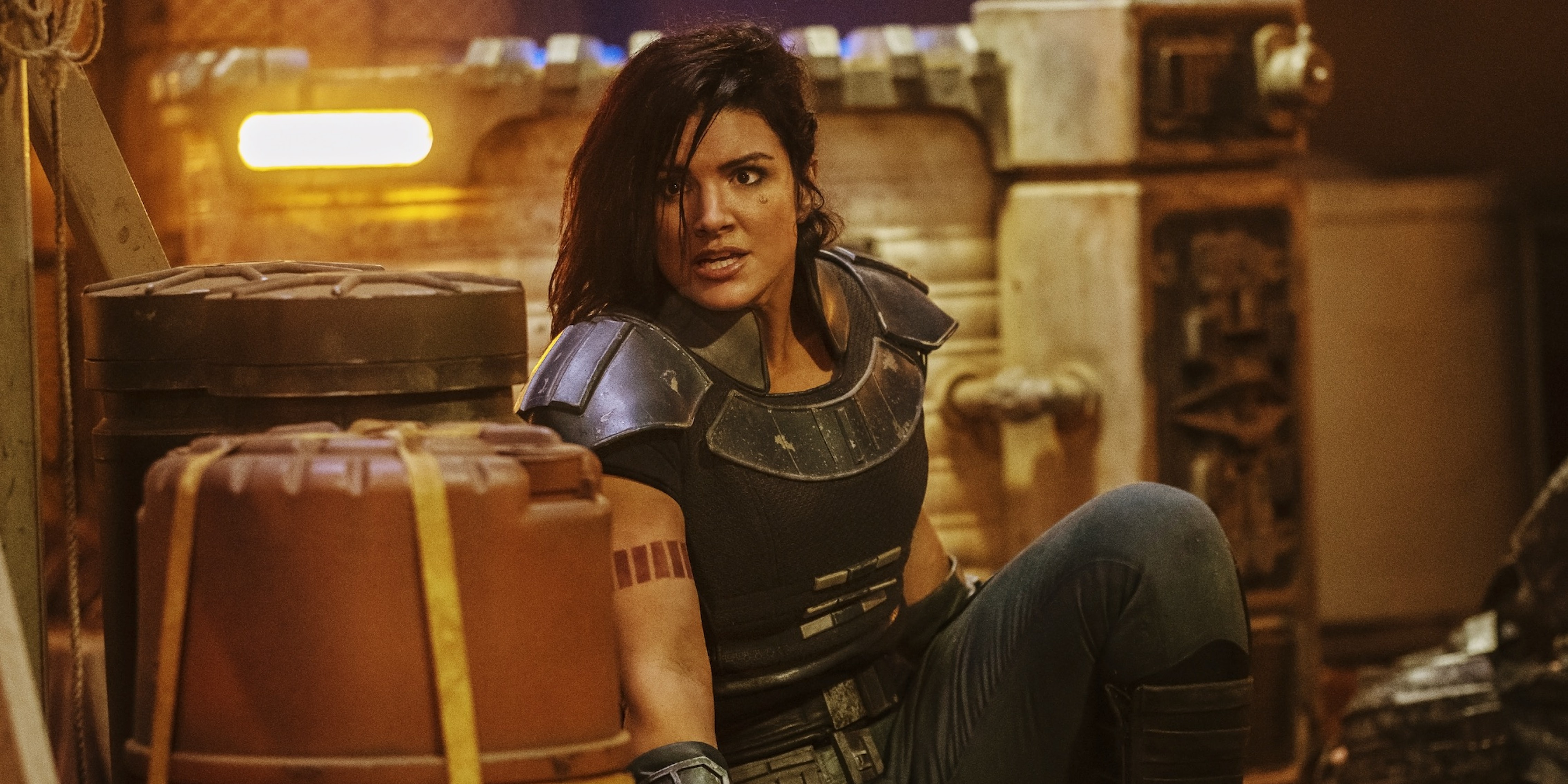 After burning nearly every bridge he had and leaving a pile of dead stormtroopers and bounty hunters in his wake, the Mandalorian just wants some peace and quiet for him and Baby Yoda; a planet where nobody can find them. But that never lasts long as his latest trip leads to a village in need of aid, a daunting Imperial machine, meeting Cara Dune (Gina Carano), and peeling back more of his identity in an episode that’s reminiscent of many a classic Western story.

We’re halfway through The Mandalorian’s first season, and we have yet to see Mando without his helmet. On the surface, it’s a bold choice for The Mandalorian to cast Pedro Pascal as your titular character, have him never take off the helmet, and somehow get us on his side. And, thanks in large part to Baby Yoda, it’s worked so far; a lot of our connection comes through a faceless hero who finds himself reluctantly enamored by pint-sized cuteness. But it’s also a core part of who he is.

As we briefly see in “Sanctuary,” the Mandalorian can take off his mask; the man’s gotta eat, after all. It’s just not something he does in front of other people. He was only a kid the last time someone saw his face, as he tells a woman named Omera (Westworld’s Julia Jones). But it goes beyond valor or courage, as the Armorer hinted at last week. According to Mando, if he takes the mask off in front of someone else, “you just can’t ever put it back on again.”

It’s a far cry from what we knew about the Mandalorians. While their armor was an integral part of who they are and have passed their armor down from one member of their clan to another, there was never any kind of helmet etiquette. It wasn’t part of the pacifist Duchess Satine’s rule, and it was not something that Sabine Wren did in exile or once she returned home and reunited with her family. Not even Death Watch, who wanted to bring the old ways back to Mandalore, enacted such a rule.

But, interestingly enough, it’s something enacted by the community who took Mando in. He reveals to Omera, a widow living in a small village on Sorgan, that the Mandalorians raised him after his parents were killed, confirming that even if Mando wasn’t specifically born a Mandalorian, he was at least raised as one. It’s unclear if his Mandalorian community’s creed to keep the mask on at all times is something specific to their tribe, another means to protect themselves, or even a bastardization of the Mandalorian way. But for now, that mask isn’t coming off unless he’s alone and about to eat something, even though Omera does her best to take it off and get him to stay on Sorgan.

That moment arrives toward the end of an episode (directed by Bryce Dallas Howard) that features action and enough moments for Mando and Baby Yoda to settle into their new lives. After all, Baby Yoda is getting restless on the Razor Crest, and while that lever ball might be enough to appease him for a bit, it’s only a matter of time before his curiosity literally breaks the ship. So Mando settles on taking Baby Yoda and himself to Sorgan, a planet that doesn’t have a starport, industrial centers, or a real population density.

That doesn’t mean that they don’t go unnoticed. Mando is in shiny Beskar steel while Baby Yoda is… Baby Yoda. He’s a tiny little creature whose movements are enough to pique curiosity and even some ire from a nearby Loth-cat very far from home. And that’s before they meet Cara Dune.

Cara and Mando both stick out in a crowd, making both of them immediately suspicious of the other. Following a quick confrontation that leads to a stalemate, they reconvene inside. Mando is on edge considering that half the galaxy seems ready to get their hands on Baby Yoda, but Cara, who recognized Mando as a member of the Bounty Hunters Guild, assumed that he was there to collect her.

Cara reveals that she’s a former shock trooper who saw most of her action after the Battle of Endor (the major battle in Return of the Jedi) but left after she went from going after ex-Imperial warlords to suppressing riots in a conversation that feels a tad rushed but gives us the nitty-gritty of just who Cara Dune is. She’s handy and capable, someone who’s seen some shit and can handle herself in most situations, but she’s also willing to walk away if she loses interest. And she knows how to plan an attack, something which comes in handy later on.

Soon after his arrival, two members of a nearby village try to hire Mando to protect their village from the Klatooinians who attacked them and stole their entire harvest of krill. The villagers can’t pay much, so Mando isn’t interested in what they can offer until they reveal just how isolated their town is, and he quickly loops Cara into the mix because she’s looking for a similar kind of escape.

That quickly goes awry after Mando and Cara discover that the Klatooinians have an AT-ST, which makes their job that much more difficult. They cannot just take down the transport on their own, and there isn’t a single thing on the planet that can. So they have to get creative, form a planned attack, and most importantly, train the villagers to fight with sticks and blasters of their own because they refuse to abandon their village; aside from Omera, most of them are inexperienced. For the most part, it works, but Cara has to enact a secondary plan to coax the AT-ST into a hole dug to bring the transport to their level so they can destroy it.

And for a time, Mando, Cara, and Baby Yoda get a taste of peace. The creature is incredibly popular with the kids (including Omera’s daughter Winta), who delight in feeding him and playing with him, and Mando even contemplates leaving him behind. But a bounty hunter with a tracking fob found their way to that village, and while Cara takes him out, Mando realizes that Sorgan is no longer a safe refuge for either of them.

Mando might be leaving Sorgan behind, but it still leaves plenty of questions in its wake. Why did the Klatooinians have an AT-ST in their possession? How did Omera know to fire a blaster when it seems like such a rare skill in her village? And is this the last we’ll see of her and Cara Dune?

As for the latter, it’s practically a guarantee. Carano is set to return in season 2 and there’s still footage of her from The Mandalorian’s trailers we can’t quite place yet. In The Mandalorian, that’s a very good thing—and not just because Cara Dune’s entrance means breaking up the sausage fest that the first three Mandalorian episodes became. Her character complicates things, gives us an indicator of someone who Mando works very well with but isn’t interested in taking Baby Yoda off his hands, and she’s the face of a complicated and often messy path in the galaxy moving forward. She’s also someone who could serve as a good longtime foil to Mando.

But as for Omera? She could be a one-off character, someone who showed us a new side of Mando’s humanity, but there’s also the potential that she could be a thorn in his side. So far, she’s the closest anyone has gotten to unmasking Mando, and given that The Mandalorian is stressing just how important to him that he keeps his helmet on, it feels like a clock is ticking until someone takes it off.