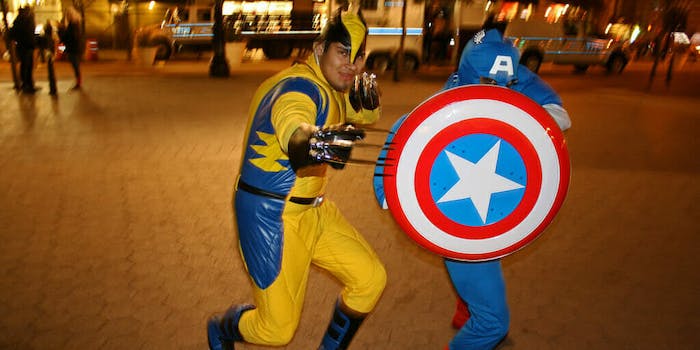 Will Marvel fans get what they want out of the Disney/Fox deal?

This Disney/Fox merger might be the most ambitious crossover of all time.

Shareholders from Fox and Disney approved a deal on Friday that allows Disney to buy Fox’s properties for about $71.3 billion in cash and stocks. But what does that mean for all of Marvel’s superheroes, and will we see them all together again?

Back in the 1990’s, Marvel was going broke trying to sell these things called comic books [pronounced: kàmik bùks] In order to stay afloat, Marvel sold the film rights to many of its flagship characters, including Spiderman, the Fantastic Four (who have yet to be fantastic on film), and a ragtag group of mutants known as the X-Men.

By 2008, Marvel was back on solid ground but without the movie rights to many of it’s best-known characters, so it released a little film called Iron Man, starring Robert Downey Jr. as a fan favorite character but one that was relatively unknown outside of the comic book world. The film reached the No. 1 spot at the box office and brought in $98.6 million on its opening weekend, the 11th biggest opening weekend in movie history.

This proved that Marvel could score a big hit with a character the majority of the public had never heard of, especially if there was a bankable movie star attached. Marvel tried again later that year, casting Edward Norton as the more popular Hulk and, although it didn’t put up Iron Man numbers, it was still a success. That’s when Disney popped up and said “We would like to own you now,” purchasing Marvel for $4.24 billion and making a lot of very rich people even richer.

Now we have a whole Marvel cinematic universe, with big names like the Hulk and Captain America, fighting alongside characters most people had never heard of, like Star-Lord and Black Panther.

Meanwhile, 20th Century Fox was scoring big hits with characters it acquired when Marvel was going bankrupt. It’s done some great (and some not so great) things with the X-Men, and 2016’s Deadpool became the highest grossing R-rated film of all time.

Now Deadpool and the X-Men are heading home. In a deal approved by 99 percent of shareholders, Disney has acquired 20th Century Fox assets, making those rich people who got richer a decade ago richer still. Although one shareholder spoke out to say they felt Disney was overpaying, everyone else was on board, either because they really want to see if Wolverine’s claws can cut through Captain America’s shield or because they like the idea of making lots and lots of money. According to Deadline, one person at the shareholder meeting even said, “I love [FOX CEO] Rupert Murdoch.”

So what does all this mean for the Marvel cinematic universe? Well, much like that couple everyone hates, the Avengers and the X-Men have been teaming up and/or fighting for years. The first time was way back in 1968.

And more recently in 2012, Marvel scored a big hit with the crossover Avengers vs. X-Men that tied in pretty much every title in the Marvel comic book universe.

It seems highly doubtful that Disney would pass on creating a movie based on something that has proven time and time again to be a hit with comic book fans. Sony still owns the film rights to Spiderman, but since it’s allowed Marvel/Disney to use the web-slinger in recent movies there’s no reason to think that won’t continue.

With the next Avengers film less than a year away (it’s set to hit theaters on May 3, 2019), it’s probably too late for Jean Grey to use the Phoenix Force to save the universe from Thanos, but that doesn’t mean we won’t get those type of epic battles sometime in the next few years. Who knows, we might even end up with a decent Fantastic Four movie.