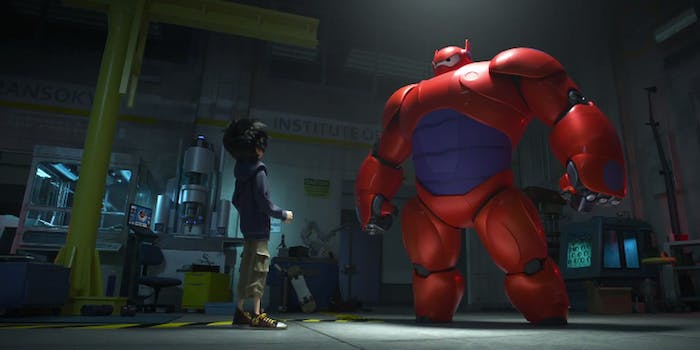 It's the first animated Marvel film for Disney.

The Marvel Cinematic Universe is finally coming to a younger audience.

Disney, which owns Marvel Studios, released its first trailer for Big Hero 6 on Thursday, the first Marvel animated film. The movie is based on a lesser-known series of comic books from the ’90s about a group of teenagers, robots, and other assorted misfits who become a team of superheroes assembled by the government.

The trailer introduces the audience to Hiro Hamada, a 14-year-old robotics prodigy, and Baymax, the robot he creates in his lab.

And just look at it. It has an air of adorableness that probably would still be present even without the squishy sound effects made by Baymax attempting to walk.

We’ve yet to see anything of the other four superheroes who will make up the team, but directors Don Hall and Chris Williams have promised at least two female characters. Once Upon a Time‘s Jamie Chung has been cast as GoGo Tomago while Maya Rudolph has been cast as another character.

It looks like it’ll be a good introduction to the Marvel Universe for kids without the violence present throughout most of the movies, but we who are we kidding. Us adults are definitely going to watch this, too.