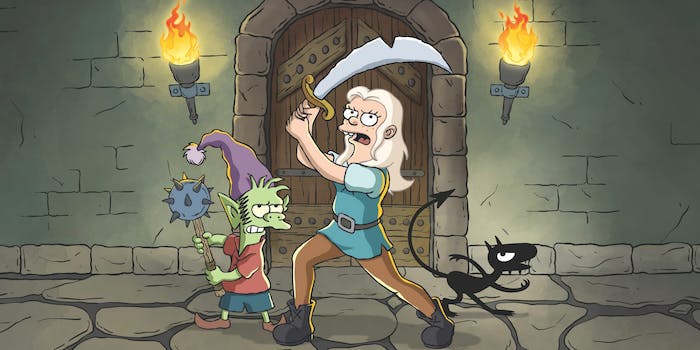 The first trailer for Matt Groening’s ‘Disenchantment’ is here

It's coming to Netflix sooner than you expect.

Our first look at Simpsons creator Matt Groening’s new Netflix series Disenchantment has arrived, and it’s packing plenty of humor as it takes us on a new fantasy adventure.

The sword-endowed throne and a death-included wedding ceremony in the trailer will likely harken comparisons to Game of Thrones, but the similarities seem to end there. Princess Bean (voiced by Broad City’s Abbi Jacobson) doesn’t appear interested in thrones or crowns, as she sets off with an elf (Nat Faxon) and a demon (Eric Andre) across the kingdom of Dreamland.

Fantasy buffs will surely recognize plenty of tropes on display mixed in with Groening’s signature humor. It’s got visual gags, witty remarks, and even a dad joke tossed into the mix as Bean and her companions defy what they’re meant to do in life. It’s only a small glimpse, but what we’ve seen looks promising.