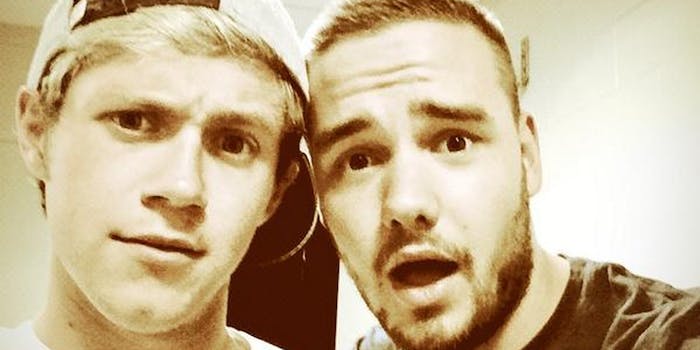 We thought the day would never come: a trending One Direction fandom tag on Twitter that’s actually a work of satire. Behold, the wonders of #TumblrFansBeLike.

#TumblrFansBeLike i can’t believe he tweeted “thank you for listening to our album :)” like what about the deaf fans? SO disrespectful.

You had no idea One Direction fans were this ironic, did you?

Actually, it’s not really wry self-awareness so much as a wry mockery of Tumblr culture.

It should be no secret by now that One Direction fans throw the most epic feuds. There was that time they started a Twitter war with Beliebers through a sandwich joke, the time they faced off over a calendar date with Whovians, and, of course, the time they feuded with a record executive and his family over a hilarious case of mistaken conspiracy.

What’s the difference? A lot, according to the fans. Generally, Directioners who are pro-Tumblr see the Twitter fans as prone to making death threats and constantly creating drama, while the Tumblr Directioners are just here to party. Witness a typical post by Tumblr user aggressiveharrys:

On the other hand, many Directioners on Twitter see the Tumblr fans as too politically correct, too obsessed with preserving the privacy and virtue of the band members, and too serious.

Case in point? The recent hashtag #BeAFanDay, poised to coincide with the return of One Direction to the U.S. on tour, had band member Liam Payne going into full-scale parody mode earlier this week. Payne decided to turn his Twitter account into a total 1D fangirl account directed at fellow bandmate Niall Horan.

After changing his Twitter name to “Mrs Horan,” Payne proceeded to spend the whole day tweeting and behaving like a typical breathless Niall fangirl.

But not all fans were happy about his behavior. On Tumblr, more than a few users were upset that Payne was, in their eyes, using the #BeAFanDay tag to mock actual fans.

That’s just the typical Tumblr “Social Justice Warrior” lack of a sense of humor, right? Well, at least according to Twitter fans, who promptly spawned the #TumblrFansBeLike hashtag in response to what they saw as Tumblr’s spoil-sport attitude.

#tumblrfansbelike obviously liam mocking us showed his true colors. he is fanaphobic and i will not stand for it.

#TumblrFansBeLike MRS horan?? why couldnt it just be MS horan not every religion believes in marriage its an insult to peoples beliefs liam.

#tumblrfansbelike What is he doing? this is making fun of my religion i am 0.2% indian this is why i only stan louis pic.twitter.com/gRN5NnVGv3

#tumblrfansbelike liam taking pictures with his phone ???so disrespectful doesn’t he know how many people cant afford one??!?

You might think that all of this is a recipe for a giant fandom melee. But it doesn’t really seem as though Tumblr fans have noticed. If they have, they’re good at turning the other cheek. Meanwhile, plenty of fans who are active on both platforms have gotten a kick out of the tag.

And there was plenty of pointing the finger at Twitter Directioners, too.

The whole tumblr vs twitter fans, nobody on tumblr gives u the time of day mate, they don’t care about ur hashtag #tumblrfansbelike

But before you go to hate either or both of the two Directioner clans, consider that there is, indeed, a self-awareness between all of the snark. After all, it takes two halves, however disparate they may be, to make a whole fandom, in all its diversity and drama.

All in all, it seems the Tumblr fans and the Twitter fans are just two different expressions on the same face of One Direction fandom.