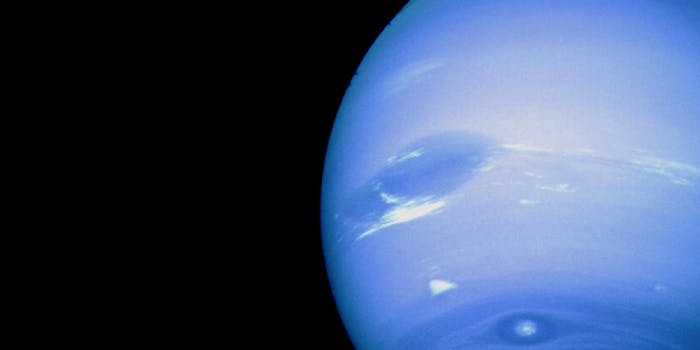 Is it really raining diamonds on the ice planets?

Here’s a headline that’s sure to make jewelry-lovers and solar system researchers alike a little starry-eyed: Scientists now believe that the giant, icy planets Neptune and Uranus may produce solid diamond rain, and they’ve even modeled the phenomenon in a new study.

It sounds like something out of science-fiction or perhaps some sort of gem-drenched glamour fiction. But as detailed by Sarah Kaplan of the Washington Post, the new study (published in the scientific journal Nature Astronomy) suggests that the presence of hydrocarbon in the two planets—combined with the intense pressure that exists within their massive, deep gas layers—could create diamond rain that drops down to the planet’s solid inner core.

The actual experiment reportedly relied on mimicking the severe pressure by using lasers to produce a pair of shockwaves inside a specially designed polymer made from carbon and hydrogen. The result, in simple terms, was that the very sort of diamond rain researchers have been speculating about was created, albeit an incredibly tiny amount and lasting less than one second.

It’s no surprise that some people on social media took note of the new study and the subsequent reporting. After all, even though millennials are apparently unimpressed with diamonds, few would pass them up if they were falling from the sky.

I see that scientists theorize that it rains diamonds on Uranus and Neptune. Wouldn't that be a form of hail rather than rain?

"Study Shows it May Rain Diamonds
on Uranus and Neptune"

I bet they didn't planet that way.

Well at least it's raining diamonds on Neptune
https://t.co/7IVbTnXp6y

So it rains diamonds on Neptune and Uranus. That's something to feel good about, isn't it?

There are diamonds in Uranus and Neptune. Now fund a mission towards our poor neglected ice giants please https://t.co/RRVhMUi2jV

Of course, this doesn’t have any immediate implications for humankind trying to harvest the diamonds of Neptune, although given humanity’s penchant for stripping natural resources, perhaps some space-faring corporation in the distant future will try to do just that.

For the time being, however, it’s simply an eye-opening scientific discovery, and a vivid and impressive reminder of just how different the other planets in the solar system are from Earth—to say nothing of just how unlikely and improbable the Earth’s habitability truly is.