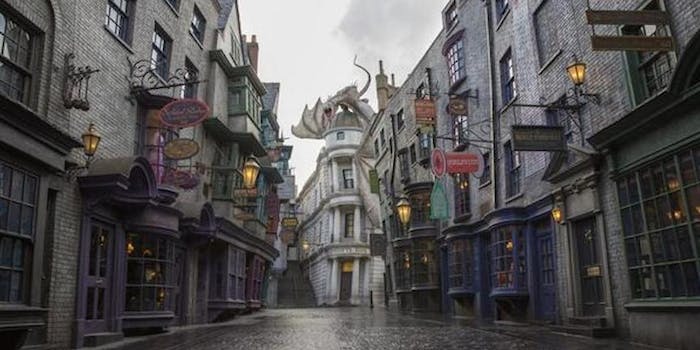 Fans have a lot to look forward to

Any doubt that Harry Potter fandom was alive and well disappeared with the announcement of new spinoff films but if any doubts lingered, they were dashed this week when fans couldn’t help but express their excitement over the opening of The Wizarding World of Harry Potter’s Diagon Alley.

Universal Studios Florida announced Wednesday that the expansion to the original Wizarding World’s Hogsmeade park would open July 8. Immediately, fans took to Twitter to react to the news, many using the hashtag #DiagonAlley.

OMG IM WAKING UP TO AN OPENING DATE FOR #DiagonAlley! ALL THE AMAZING PHOTOS! IM CLOSE TO TEARS! @UniversalORL @OrlandoInformer #potterwatch

Okay seriously who’s going to take me to Florida to Diagon Alley. I need to go. ✨

A preview event is being held at the park this week, meaning pictures are also surfacing on social media showing what fans can expect when the park opens. These sneak peeks show the park’s decor, the working Hogwarts Express train that will connect the two parks, various merchandise, and delicious Potter-themed food, all stoking the fire of the fandom.

Looking at pics of the new Diagon Alley in @UniversalORL & just wishing I could apparate over there like NOW!

The cast has also been on hand at the park for a red carpet event and interviews. They’ve been tweeting and sharing their own discoveries in Diagon Alley as well.

AND I JUST SAW A CRUMPLE HORNED SNORKACK FOR REALS AND PAID MY RESPECTS AND IT FEELS LIKE ENLIGHTENMENT. pic.twitter.com/r6DgfBpdDH

Everything at the park looks impressive and thought-out, down to the tiniest detail. It looks like the expansion may be yet another answer to the fandom’s prays for more Potter goodness!