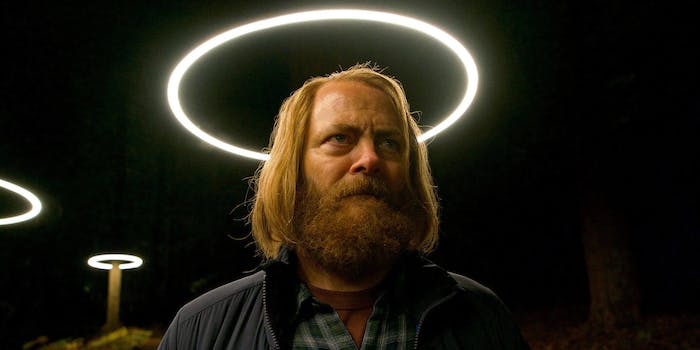 Watch the trailer for ‘Devs,’ a sci-fi show from ‘Annihilation’ director Alex Garland

The Nick Offerman-led series looks like the first must-watch of 2020.

Alex Garland is one of the most interesting sci-fi filmmakers working, and this year he’s moving into TV. After writing and directing Ex Machina and Annihilation, he’s created an original miniseries called Devs, a sci-fi thriller about a mysterious tech company. The first trailer arrived today, and it looks as cool as you’d hope.

The show stars Nick Offerman as the CEO of quantum computing company Amaya, and Sonoya Mizuno as Lily Chan, an engineer investigating the disappearance of her boyfriend. Even if you don’t recognize Mizuno by name, you’ll know her if you’ve seen Garland’s other work. She played the second android character in Ex Machina and the alien doppelganger in Annihilation, rounding out her weird sci-fi resume with a standout supporting role in Netflix’s 2018 miniseries Maniac.

The trailer is exactly what you’d expect from an Alex Garland project: enigmatic and stylish, with menacing undertones. At New York Comic Con last year, he explained that Devs is about quantum computing and determinism—basically, the potential impact of computers being able to predict the future. Mizuno described her character as an “unusual protagonist” among the show’s ensemble cast, which also includes Alison Pill and Cailee Spaeny.