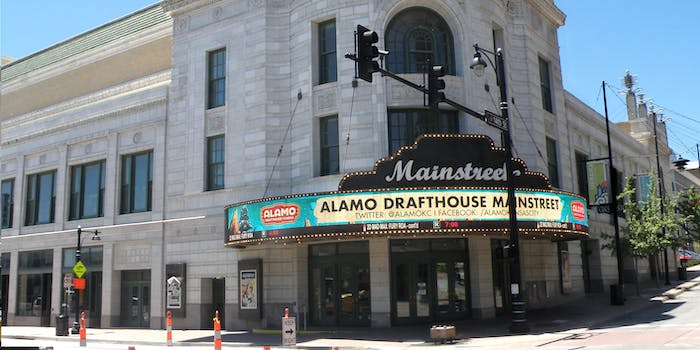 The film community is not happy with the Alamo Drafthouse's decision.

Best known as the editor-in-chief of Birth.Movies.Death., Faraci stepped down after being publicly accused of sexual assault. By that point his public image was already marred by a history of social media spats and harassment—including one instance where he urged a screenwriter to kill himself. So it was surprising for many to see Faraci return to the fold after less than a year away.

Faraci now works for the Alamo Drafthouse cinema chain, revealed by readers who noticed his name credited in the Drafthouse’s Fantastic Fest brochure. Since Drafthouse owns Birth.Movies.Death., it’s more like he took a temporary break from the company before moving to a less visible position.

Once Faraci’s involvement in Fantastic Fest came to light, Drafthouse CEO Tim League responded in a statement to The Hollywood Reporter. League says that Faraci has already paid a price for his actions, and is now making “necessary changes in his life to prevent something like this from ever happening again.”

“His departure from Birth.Movies.Death meant losing his job, his livelihood, his career, and his place in the film community, but Devin has started the work to rebuild himself first with the understanding that all else is secondary. Seeing the work that Devin has been doing to acknowledge his faults, to address his addiction, and to better himself, I thought it was important to contribute to his recovery process by helping him with some means to earn a living. Once it became clear that his efforts were sincere, I offered Devin copywriting work at Alamo Drafthouse and have recently expanded that to include writing blurbs for our Fantastic Fest festival guide. He does not hold any leadership position at Alamo Drafthouse or Fantastic Fest and is not involved with Birth.Movies.Death. in any capacity.”

Some members of the film community responded in disgust, with a few calling for a boycott against Drafthouse theaters.

Faraci had power in his field once and repeatedly proved he can't be trusted with it. There's no good reason to reinstate him.

Faraci bullied people for YEARS. Why should he be let back in with open arms? What does a white dude have to do to face consequences?

Good news everyone: a sober Devin Faraci will be telling you to kill yourself from now on.

“I understand there’s some discomfort with the idea that Devin is once again employed by the Alamo Drafthouse,” League writes. “However, I am very much an advocate for granting people second chances, and I believe that Devin deserves one. He continues to confront his issues and to better himself with the help of his friends and family. I am proud to consider myself a part of this process.”

League decided that Faraci’s “efforts were sincere,” and that he’d been punished enough for his transgressions. But for some people in the community, it feels like League made a moral judgement on everyone else’s behalf. By involving Faraci in Fantastic Fest, League runs the risk of alienating women and sexual assault survivors who are uncomfortable with Faraci’s presence.

If you support Devin Faraci, friend or not, you cannot ever call yourself a supporter of women. Period.

Despite acknowledging the “culture of sexual harassment and gender inequality” in the film industry, critics say League may be perpetuating that culture himself. Plenty of talented film writers—many of them women and people of color—are still waiting for their first chance at a gig like Faraci’s. Meanwhile, the Alamo Drafthouse is publicly supporting a scandal-prone white guy with a history of online harassment and sexual assault allegations.

Update 3:52pm CT: Austin 360 is reporting that Fantastic Fest director of international film Todd Brown resigned in protest upon discovering Faraci was back. Additionally, Faraci’s blurbs on Fantastic Fest’s website have been removed and replaced with work from a different writer.