How Atari paved the way for mobile gaming

Some of the oldest game cartridges share a lot in common with modern games.

The display of Atari hardware and software presented at the 2015 Game Developers Conference by the Videogame History Museum was a veritable treasure trove of video game majesty.

Before attendees at GDC entered an expo hall to play with experimental game controllers, and to try the games in the GDC Play exhibit, they had to pass by a temple dedicated to legendary video games. Display cases filled with Atari hardware, consoles and computers dating back to the beginning of the living room video game invasion of the late 1970s, were set up alongside working, legacy Atari consoles and games for GDC attendees to play.

“The younger developers probably aren’t too familiar with some of the stuff,” John Hardie, one of the directors of the Videogame History Museum, told the Daily Dot. “Even the people who don’t quite know what it is, they seem to appreciate what it is, and they know that it’s valuable to preserve this history.”

“It’s very rare to find industry people that don’t have some association with the history of the industry,” Joseph Santulli, founder of the museum, told the Dot. “Every once in a while you get a young kid that will tell me ‘Hey, this stuff came out all before I was even born,’ and you can give them a little bit of a primer as to what each thing is, but it’s pretty rare for somebody to not know.” 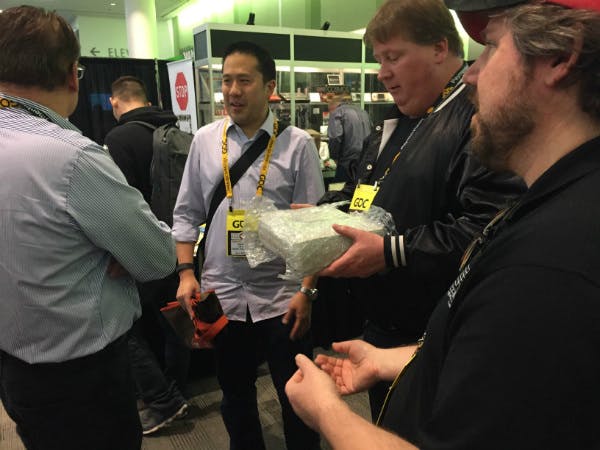 John Hardie and Joseph Santulli of the Videogame History Museum (right) receive a gift of an Atari Panther development kit.

“We’ve been collecting ourselves for over 30 years, my two partners and myself,” Hardie said. “This weekend we’re picking up a Star Trek cockpit machine someone’s donating. Actually, it turns out to be signed by Leonard Nimoy.”

Shortly before we spoke with Hardie and Santulli, they were given a copy of an Atari Panther developer kit by a GDC attendee. The Panther was developed by Atari at the same time the Jaguar console was in development. The Jaguar was released to the marketplace, whereas the Panther was not.

“We get people all the time coming up to us saying ‘I have this, it’s sitting in my house, I’d much rather give it to you guys and have it on display,’” Hardie said. “A lot of the developers, the early game designers who we’ve befriended over the years… early Activision guys, early Atari guys, have donated their entire archives to us.” 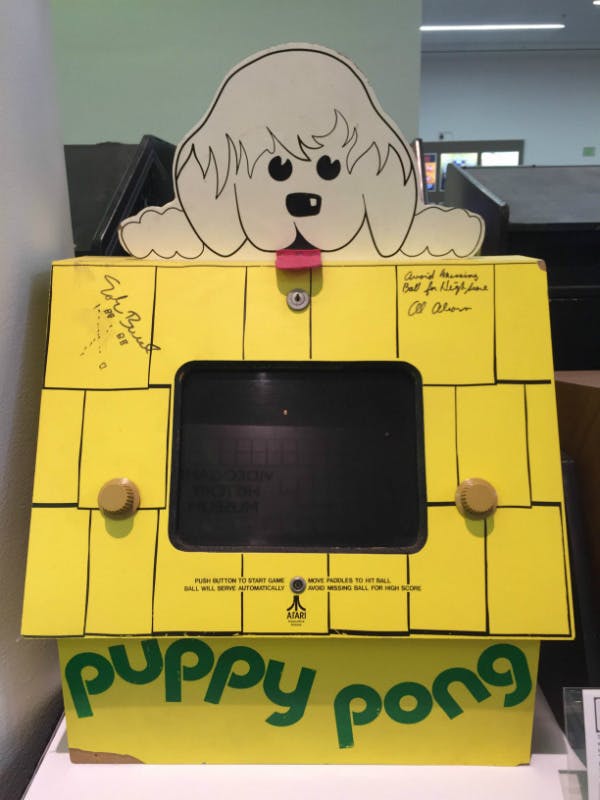 Nolan Bushnell, who founded Atari, Inc., has attended functions held by the museum. Among the items in the collection at GDC was a copy of a Puppy Pong machine, with Bushnell’s signature.

Part of the joy of attending these sorts of museum exhibitions is discovering hardware or peripherals that someone may have been completely unaware of, or had only read about but never seen in person. We had no idea the Atari Panther was a thing that existed, nor had we ever seen Puppy Pong. 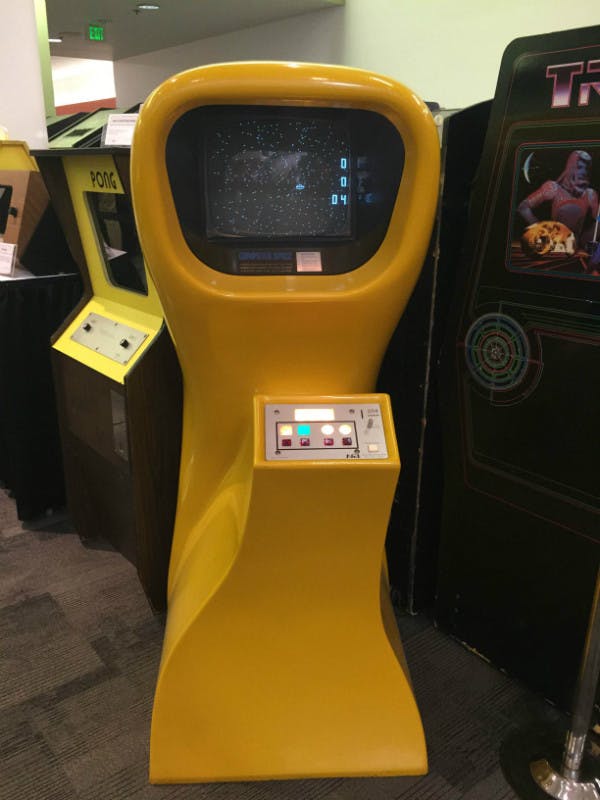 We also had our first look at one of first coin-operated arcade games ever, Computer Space.

“It’s 1971, and these guys are developing the machine,” Santulli said. “They didn’t have anything to work off of, other than ‘How are we gonna get this game on a television set, and have people interact with it?’ That’s all they were working with. And it’s actually kind of amazing, although it doesn’t look anything like the cabinets later did.” 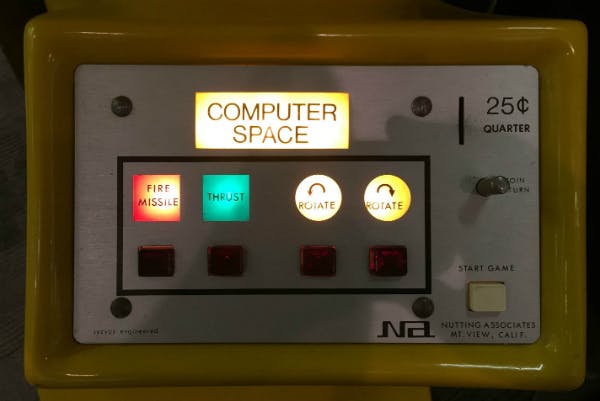 “It’s got all of the other trimmings that you would expect,” Santulli said. “A coin slot, controls in front of you, a television screen at approximately your eye level, and a score, to keep track of things. Despite the odd shape and look of it that didn’t catch on, they had most of the other ideas right.”

While hardware like the Atari Panther and the Computer Space arcade machine may seem like mere historical curiosities, there are lessons relevant to the modern video game industry that developers like those at GDC can learn. From a certain point of view, old-school Atari games even have a leg up on modern games.

“There are some designers and developers now who are looking to what made games fun, and that was a big factor back when you only had 2k-4k [of memory] to work with,” Hardie said. “The game had to focus on being fun, and not so much the graphics or whatever. And I think we’ve always said that, not everybody, but some of the modern games have lost that element. They have a lot of flashy graphics that look great, but are they really fun to play?”

According to Hardie, game designers will often stop at Videogame History Museum displays like those shown at E3, and look at old design documents, trying to figure out what made these old school games work, and why people loved them so much. The designers are looking for ideas on how to apply those lessons to game designs in the present day.

“I spent a lot of the day yesterday sitting down with developers in front of an Atari 2600, playing the game Outlaw,” Santulli said. “What I did hear quite a bit from those developers was ‘Oh, look, here’s some real simple gameplay elements that make the game, no matter how terrible it looks, that make the game fun… I think they can definitely appreciate the fact that you’re working with such a limited amount of space and technology, but still able to make such a fun experience.” 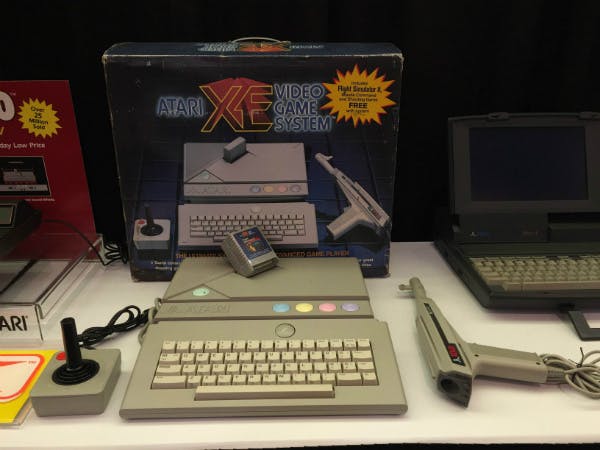 Hardie tends to stick with old-school games that only take 15 minutes or so to play, games like Space Invaders or Gyruss, and his tastes reflect the demographic that modern, mobile games have so deftly and lucratively played to. Hardie acknowledged that mobile games which focus on short play sessions are the spiritual inheritors of Atari’s legacy.

“Modern games represent everything now, so [they] represent the complicated, Skyrim-type games [in which] you have an investment in time,” Santulli said. “But, you could say that a lot of phone app games really do exactly what these games did back then. They’re simple, they’re meant for you to just sit down and play for a short amount of time, or they’re not particularly built in a way where you have to worry about coming back to it again and again and again, with a password. 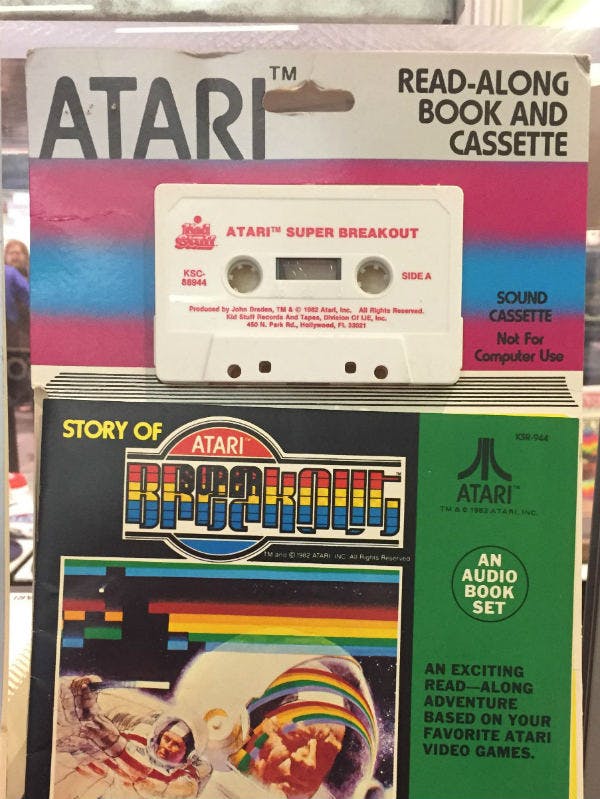 Santulli doesn’t feel the influence of Atari games are limited to today’s mobile games. He feels that Atari inspired a video game spirit that also lives on in some of the modern industry’s biggest and highest-profile games, like Skyrim.

“In terms of how far can you go with a basic idea, and do it in a much bigger scale, my favorite game of all time was Adventure, on the Atari 2600, which is real simple,” Santulli said. “You’ve got a little block, there’s a sword, there’s a couple dragons, and that’s it. Get the chalice to the castle.”

“To me, Skyrim is the ultimate Adventure. There are things going on that aren’t on the screen that you’re looking at. You have a weapon, you have bad guys, there’s a quest that you have to complete. What lured me to [Adventure] when I was a kid, that simple quest, sometimes randomized, you didn’t know exactly how it was going to play out, is basically what Skyrim is doing today, but of course with a studio of 300 people putting it all together.” 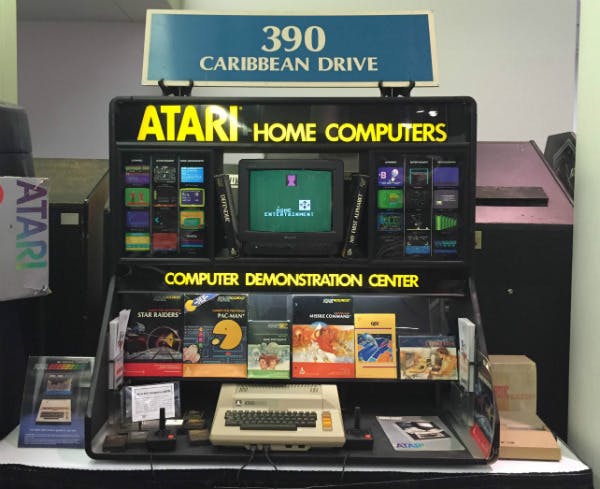 The Videogame History Museum is planning on opening up a physical location, sometime between June and August. Having a location where voltages can be checked, and conditions can otherwise be controlled, is integral to making sure some of the hardware on display at GDC 2015 can be powered up for use without risking damage. Santulli thinks that even people who aren’t involved in the video game industry, or who are enthusiasts, may have reason to visit.

“This is such an important part of culture, whether or not you’re involved in it,” Santulli said. “Whether or not you embrace it. You can’t ignore it. If, for any reason at all, you needed to learn about it, or it came to you, you would be able to see, [the museum] fills in that block of why do people care about it, and we’re really showing the entire lineage. How it started, why it was important, how it’s actually developed our culture, how other pieces of culture have taken from video games and expanded upon themselves.”