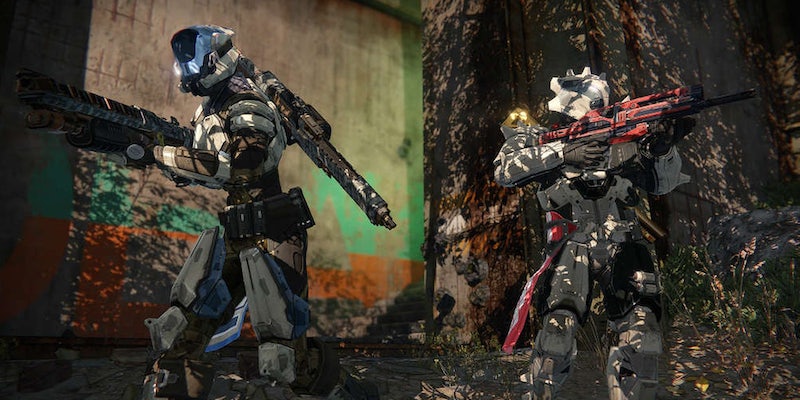 You have to have friends to go on ‘Destiny’ raids

Bungie is limiting Destiny "activities" to groups that are already acquainted.

Imagine you have a ticket to the best club ever, but they’ll only let you in the door if you have five friends with you. That would suck, right? Welcome to raids in Destiny.

Destiny, the hotly-anticipated new game from Bungie, has elements from several different genres. It clearly has massively multiplayer online games in its DNA, and one of the mainstays of an MMO is the raid.

Raids are encounters intended for very large groups of people that can take hours to complete. Raids almost always involve fighting your way through a challenging environment to kill an extremely dangerous boss monster at the end. When the boss dies, it drops very rare loot items like weapons and armor that are immensely powerful.

When an MMO player is finished with all the main quest lines, raids often become their primary game experience. Some players might join guilds exclusively to be part of an organization that has the infrastructure in place to manage raids. Players’ schedules need to be synchronized. There are certain key roles, like certain types of character classes, which must be present in the group for the raid to succeed.

Destiny has two design aspects that evoke MMO raids. Strike missions are designed to take up to an hour to complete. This is much shorter than a traditional raid in an MMO, but the structure of a strike mission is very similar. A three-player fire team steps into an instanced mission that is particularly tough, and then fights a powerful boss at the end.

Bungie has also talked about “activities,” in which up to six players will face a punishing gauntlet, and teamwork is an absolute prerequisite for survival. According to Bungie, these activities will take hours to complete, and they are difficult enough that no one should expect to get through these activities on their first pass.

Bungie hasn’t outright called these activities “raids,” but the word keeps slipping into the conversation between Luke Smith from Bungie and IGN. Probably because if it walks like a raid, and talks like a raid, it’s a raid.

You may only tackle these activities (which are not raids) with your friends. By “friends,” we ostensibly mean players on each others’ friends lists on either Xbox Live or PlayStation Network. And if these raids are as challenging as Smith suggests, having trusted friends along for the ride is a no-brainer.

But what if you don’t have five Xbox Live or PlayStation Network friends who own Destiny? Or what if you do, but they’re spread out on different platforms? Destiny will be available on the PlayStation 3, PlayStation 4, Xbox 360, and Xbox One on the day of release.

Again, raids require real-life schedules to be synchronized, both for availability and for the length of time players can devote to playing. Even if you have five friends who own Destiny on the same platform you do, can all six of you hop online at the same time and devote several hours worth of game time? If you can’t commit to the long haul, the raid can be a waste of time. All the good stuff, like the high-level gear, is usually at the end.

Normally the need to fill open spots in a group for a multiplayer activity would be handled by matchmaking—the program sifts through the available players online who are interested in the same activity as the group with open spots. The program then shunts these other players into the open spots to fill up the group. Bungie is not offering matchmaking for raids in Destiny. It’s either friends or nothing for raid parties.

If these raids are as challenging as Smith told IGN, just randomly asking people you meet in Destiny to join you for a raid might be a fool’s errand, as you have no history of working with those people. The more reasonable solution would be to join out-of-game Destiny-themed social networks or message boards to meet new people.

But that might be an unreasonable amount of effort for someone who just wants to relax on their couch and play some console games. This situation evokes thoughts about how MMOs have never worked on consoles, for a variety of reasons. Some of those reasons are mechanical, i.e. how the controls work, but Bungie has accounted for this by making Destiny, for the most part, a first-person shooter game.

It’s the social mechanics that make an MMO unsuitable for game consoles. Joining parties and larger groups for raids is essential for longterm play in massively multiplayer online games. Most communication in an MMO is text-based chat, and game consoles don’t come with keyboards, though they may offer keyboard peripherals for purchase and/or be compatible with off-the-shelf PC keyboards and mice.

Destiny doesn’t involve text-based chat. It may, however, require a version of traditional MMO social interaction when it comes to “activities.” Without those in-game communications channels, these raids might be inaccessible to some Destiny players, or just not worth the effort of going out-of-game to find raid partners.

Members of the press and the video game audience had been doubtful of Destiny’s basic design precepts prior to the Destiny beta that concluded on July 27. The beta changed a lot of minds on that score. People finally understood what Bungie was going for, and for the most part, they seemed to have liked it. Anticipation for Destiny has been markedly whipped up by the beta.

The concern over these raids being friends-only might similarly fall by the wayside once players get into the retail version of Destiny. For now, it’s something else to add to the list of players’ concerns, because Bungie continues to play its cards close to the chest.