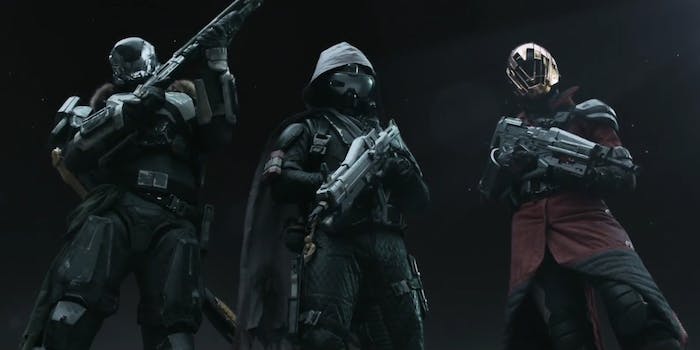 See it before it hits TV.

As if Destiny fans didn’t have enough to be losing their minds over so close to the game’s release, Bungie provided the cherry on top this afternoon with a new live-action trailer.

So far Destiny has been sold as a high-fantasy, space opera sort of game. Humanity’s almost extinct, giant space aliens lurk in the darkness, heroic warriors, that sort of thing. And while the beta was great, the characters themselves, the Guardians, were a little unrelatable.

A fire team of Guardians listening to Led Zeppelin while killing aliens on the Moon and Venus and Mars might be too much of a juxtaposition for some. Seeing that there are real humans using contemporary language behind those masks might, for others, play into the fiction that these Guardians are our descendants, and not high-fantasy types.

The “Become Legend” short was directed by Joseph Kosinski, who is also the director of Oblivion and TRON: Legacy, and will premiere on television tonight during the Seahawks/Packers game.

Developer Bungie has always been good at providing fodder for live action advertisements, so of course they made a badass Destiny spot.

Destiny will be released for the PlayStation 3, PlayStation 4, Xbox 360, and Xbox One on Tuesday. Of course, if you’re going to play Destiny, you probably already knew that, because you pre-ordered your copy ages ago.