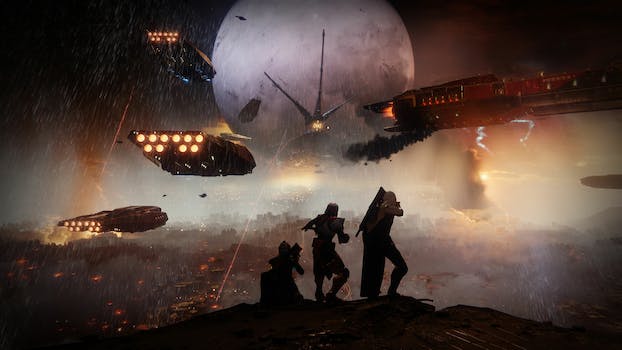 There isn't much new in Destiny 2, but there's still a lot to like.

Before launching in 2014, Destiny was poised to set the world on fire. Coming from the fabled developers of the original Halo trilogy, the massive multiplayer experience teased a grandiose tale of deep space exploration coupled with competitive and cooperative online features that aimed to define what ‘next-gen’ gaming could be. However, the argument of Destiny’s continued impact on the industry still rages on. Diehard fans have devoted thousands of hours into a cycle of lengthy missions and enticing loot drops, while detractors rail on the repetitive nature of those few available planets.

In comparison, Destiny 2 has a less ambitious scope, but feels more confident in what it aims to do. A hardcore audience is connected to what many have identified as flaws within the first game, and yet Destiny 2 is trying to address both groups and draw them in. Bungie is now attempting to improve on a single-player story, player-vs-player matchmaking, and wave-based combat modes, all while preserving the identity of the original title. This is no easy feat.

From the opening mission, it’s clear that storytelling is now a priority. The opening cinematic gives characters like Cayde-6 and Ikora Rey more agency than they had in the entirety of the first game. Old school Halo fans should be pleased by the scale of these cutscenes as well, cutting simultaneously between ground and air forces as a looming threat makes itself known. Much of this introduction was revealed prior to E3, but being able to go hands-on should reassure Destiny diehards and maybe even convince some relapsed players to keep the game on their radar.

Gameplay was never the problem with Destiny at launch, and here it only feels stronger. Shooting is consistently satisfying, with the variety of weapons adaptable to your preferred style. There isn’t much new in terms of weapon class or equipment, but each player can create multiple Guardians to mess with the new subclasses. These customizations grant small but significant bonuses, such as a healing ring for the Warlock, or a damage-absorbing wall planted by the Titan. Much of the game’s appeal is tied to your usefulness handling multiplayer missions, and the classes remain distinct enough to each make a compelling argument.

A much-maligned faction from the first game, the Cabal, makes up most of the enemies in this Homecoming mission. They tend to be bulky, slow-moving behemoths that deal a lot of damage. Enemy soldiers behave intelligently; they will often strafe and move to cover as if they were mindful members of an opposing player-controlled team. The mission’s closing moments introduce the big bad, Ghaul, who seems slightly generic in his motivation, at least here.

The available story content and three-player strike take players to some gorgeous vistas that are sure to impress. With swaying trees, illuminated skies, and even dazzling market squares, the world of Destiny 2 feels more lively than ever before. There are also several NPCs encountered during the intro, adding a human element to the large-scale destruction players are witnessing. The crux of Destiny 2’s plot hinges on players abandoning all their progress from the past three years, though it remains to be seen if the context for separation is deemed worthy by the most dedicated users.

Not much has been reinvented for Destiny 2. At its core, gameplay feels nearly the same as before. This has led some to call the game “Destiny 1.5” but improvements made on other fronts are pointing toward a warranted sequel. The issues that stick out in the beta are platforming sections, which consistently frustrate thanks to imprecise and floaty movement. Two sections with a turbine and drill, respectively, will probably kill even the most skilled Guardians multiple times.

As a beta, what we’ve seen of Destiny 2 so far isn’t very surprising. Bungie promised fans a more robust story, with better integrated multiplayer and social components we have yet to experience. If you’ve missed the weighty, tactful gunplay of Destiny, this brief glimpse should scratch your itch. But for players hoping to see a vastly redefined Destiny experience, if it is coming, it won’t be found here.

Destiny 2’s open beta runs until July 23 on PlayStation 4 and Xbox One.