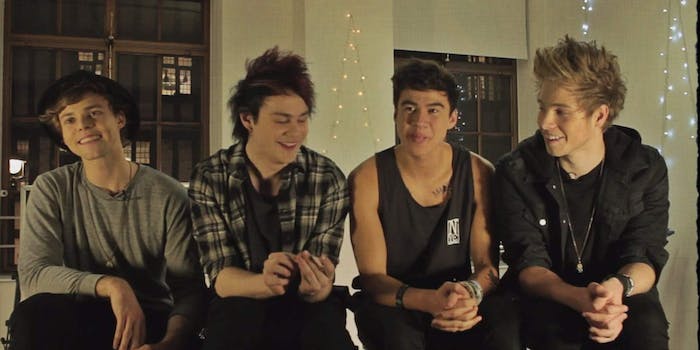 Will you cosplay for 5SOS?

When One Direction decided to do a seven-hour livestreamed variety show for their fans, it seemed like the ultimate mashup between pop music and Internet fandom. But now Australian pop-punk boy band 5 Seconds of Summer have upped the stakes by announcing an official 5SOS convention, Derp Con.

5SOS started off as YouTube stars before joining 1D on tour and gaining mainstream success. Like many popular YouTubers (and 1D themselves), they’ve inspired a fan following that is often more interested in the band and their social media antics than their music.

The idea of a band-specific fan convention has got to be the most extreme example of this so far, with 5SOS’s announcement video showing several of the boys goofing off and inviting fans to dress up in cosplay for the convention.

There will be worldwide competitions to win tickets to Derp Con, which includes a concert but mostly seems to focus on fans hanging out together, dressing up as superheroes, and celebrating 5SOS fandom. Unsurprisingly, fans on Twitter are already freaking out over whether they’ll win a ticket, although some countries are not lucky enough to be eligible.

#5sosderpcon Even tough Croatia is not on the list, I am so happy for others :D Not every band does things for their fans like 5SOS does :D

@5SOS Why Bulgaria isn’t in the countries for #5SOSDERPCON? You have lots of fans here. This isn’t fair.

This all begs the question: When will One Direction organize their first convention? Sure, they may not really have a geek-friendly superhero theme, but at this point they definitely have enough fans to fill up a convention center or two.