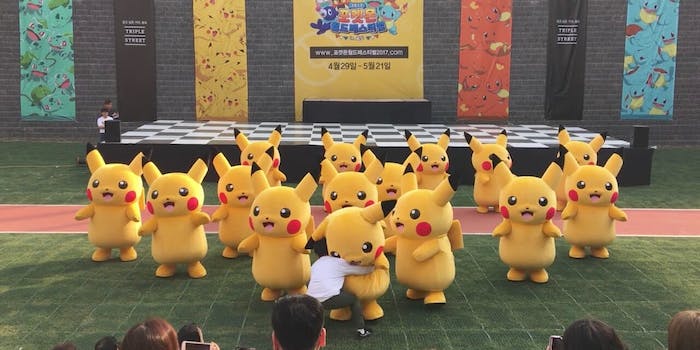 The response by handlers was swift—and kind of terrifying.

You can’t stop the beat, but deflation can stop a giant Pikachu.

In a video spotted by the Verge, a bunch of giant Pikachus danced together at Pokémon World Festival 2017 in Songdo, South Korea last weekend, and at first, all seems well. They danced—or, given the suits, shuffled along—to “Uptown Funk” and Hairspray’s “Can’t Stop the Beat” as the crowd cheered. But soon enough, something began to go horribly wrong with one of the lead Pikachu dancers.

The Pikachu started to sink around the 1:00 mark, and as we processed the idea that these costumes are inflated and not just worn, it’s tackled by a swarm of staff members and taken off the dance floor. It’s amusing and horrific, and we just can’t look away.

And if you decided to tune out after the first tackle, reconsider. The deflating Pikachu, back from what we can presume is a Pokémon Center, attempted to return to the dance floor a couple minutes later. The staff members who helped it return wanted the Pikachu to succeed and even prompted the audience to cheer for the return.

But alas, it was not meant to be.