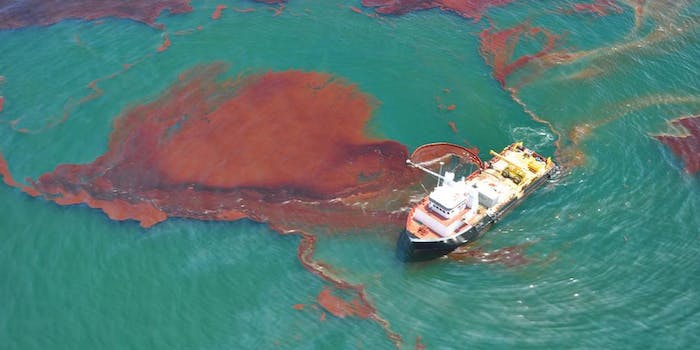 Where we stand 5 years after Deepwater Horizon

The oil is a stain on the gulf that won’t be easily lifted.

Five years ago today BP’s Deepwater Horizon oil-drilling rig exploded, killing 11 and unleashing millions of barrels of oil into the Gulf of Mexico.

Deepwater Horizon was the largest oil spill affecting US waters. See how other spills stack up https://t.co/6iifikyENc pic.twitter.com/F6QC3Ev8cD

Needless to say, the impact on the Gulf’s ecosystem and the infrastructure that relied on it was nothing short of catastrophic. Animals such as dolphins and sea turtles are still struggling today and some fishing industries are failing to bounce back. The general consensus is that the environmental consequences of the spill are far from over.

Researchers, institutions, and news outlets are using the opportunity to spread awareness of the ongoing efforts to research the spill, restore the ecosystem, and question the wisdom of offshore drilling.

Government agencies like the United States Department of Agriculture and the National Oceanic and Atmospheric Administration (NOAA) are also seizing the day to promote their work in the area.

The scientific team aboard the E/V Nautilus (now famous for geeking out over the sperm whale sighting last week) is currently exploring natural gas leaks in the Gulf of Mexico. They hopped on the subreddit, /r/science today to do an AMA about their current project.

The team shared some revelations about the effects of chemical dispersal agents that were used to break up the oil. Nautilus researcher Eric Cordes responded to a question about dispersants, “The use of dispersants was and still is controversial. They are supposed to act like a detergent and break up the oil into smaller droplets. However, they also make the toxic components of the oil more ‘bioavailable.’ [easier for organisms to absorb]”

The team even found that the dispersants were even more toxic to corals than the oil itself.

You can watch live streams of the E/V Nautilus exploration of the Deepwater Horizon site on their website.