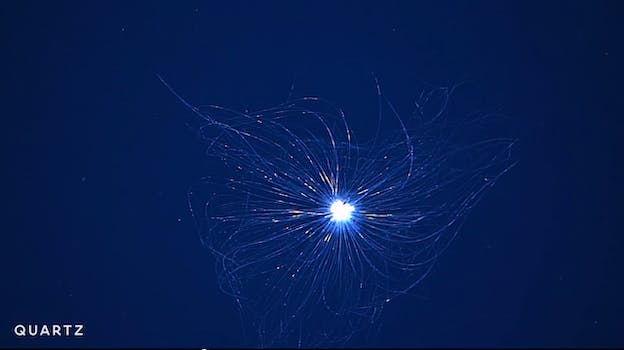 Some of them are totally new to science!

A group of researchers from the National Oceanic and Atmospheric Administration (NOAA) are using robots to explore the deep sea off the coast of Puerto Rico. Here are some of their highlights, as curated by Quartz:

Basically, it’s really hard to keep people alive at the bottom of the ocean. There’s a lot of pressure down there, and it’s very, very dark. Funding for marine research is also thin. There are also more “things” to discover than there are on the moon. The moon is basically just a bunch of rocks, but the oceans are a bunch of rocks and life-forms.

We’re learning more every day, though, thanks to new technology like satellite-enabled animal tags and the robots you see in the video (called remote-operated vehicles or ROVs) that can more easily plumb the deepest corners of the sea.

The Internet is helping too, as the researchers mentioned in the video. With live webcasting and chatrooms, researchers from all over the world can tune-in and help identify the creatures that the team finds.

“In a total of 12 dives, they saw 100 species of fish, 50 species of deepwater corals and hundreds of other invertebrates, many of which had never been seen in their natural habitat. [The scientists are] still analyzing the data they collected, but have already identified two new species: a jellyfish-like animal called a ctenophore and a new type of fish,” Quartz reported.