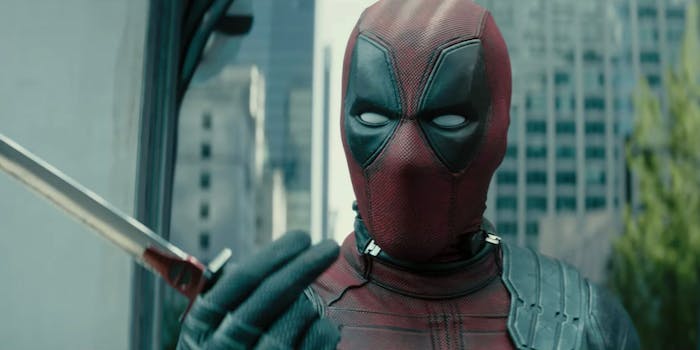 Deadpool mocks ‘Avengers: Infinity War’ no-spoilers letter with one of his own

The hashtag is an autocorrect fail.

With Deadpool 2’s release just days away, Deadpool himself is asking fans not to spoil the movie—while potentially spoiling it in true Deadpool fashion.

If the letter posted to fans on star Ryan Reynolds’ Instagram account sounds familiar, it should. It’s a parody of the open letter written by Avengers: Infinity War directors Joe and Anthony Russo to Marvel fans ahead of the film’s opening.

The Russo Brothers’ letter, noting just how long Marvel fans had waited for the film, asked fans to protect other fans who hadn’t yet seen the movie so that everyone could experience the surprises on the big screen. It was seen as a heartfelt gesture, even if most of the internet threw that mentality out the window once spoiler-heavy memes rose in popularity.

Reynolds’ letter, on the other hand, is mostly on the snarky side and falls in line with Deadpool’s fourth-wall-breaking humor, already prolific in a film that name-checks Thanos (who is played by Josh Brolin, who also plays Cable in Deadpool 2) and the dreariness of the DC Universe. The letter calls the Deadpool 2 press tour the “‘This is Kind of Your Guys’ Fault’ World Tour” and reveals a number of events that may or may not happen in Deadpool 2. Even the hashtag plays off the Russo Brothers’ letter, except that auto correct gets in the way of things.

“We’re asking that when you see Deadpool 2, you don’t say a fucking word about the fun shit in the movie,” the letter states. “Cause it’d be super lame to spoil the fact that Deadpool dies in this one. Kidding. Not kidding. Kidding?”

But coming from the movie that’s advertising itself with the tagline, “From the studio that killed Wolverine,” we wouldn’t expect anything less.