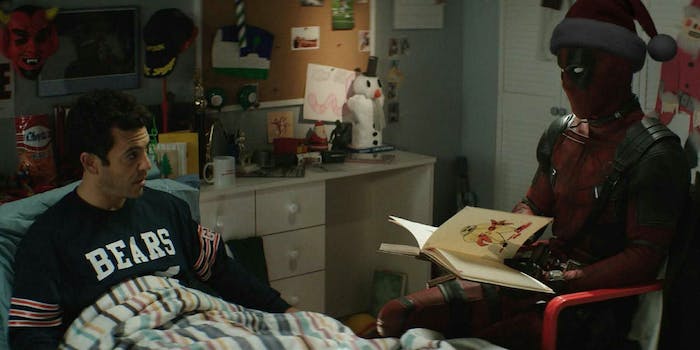 Ryan Reynolds was involved in shooting the new scenes.

In the midst of a release schedule shuffle last month, Fox announced that it would be releasing a PG-13 version of Deadpool 2, a movie that definitely earned its R-rating, in December. With that release coming up, we now know a little more about what that will entail—and it’s more than just editing.

Some of the changes to make Deadpool 2 a PG-13 movie will be on a granular level. Certain scenes will likely be less gory and violent, and there will be a hell of a lot less “fucks” contained throughout the movie; for the most part, films only get to use it once before getting an R rating. But according to the film’s screenwriters, the PG-13 Deadpool 2 will also contain new scenes made just for the PG-13 film.

In a new interview with Slashfilm, Rhett Reese and Paul Wernick revealed that some of the cast—they could only confirm that Ryan Reynolds was involved—recently returned to shoot new footage that will debut with the December re-release.

“We definitely shot new stuff,” Wernick told Slashfilm. “And recently too. After Deadpool 2 came out and we were all sitting around, we came to it less about the idea of let’s make a PG-13 movie and more, ‘Let’s talk a little bit about Deadpool.’ We were kicking around some ideas and then I think it was Ryan [Reynolds] who had the great framing device and we all got excited and went to the studio. They said, ‘Yeah, let’s do it. Fire up the cameras.’ About two months ago we were out on soundstages shooting again. Ryan was in the suit and the gang was back together, Dave Leitch and Ryan and us having a great time and laughing. It comes together great so we’re super excited about it.”

Reese and Wernick wouldn’t say much about what was in the new scenes made for the movie, but they also noted that they didn’t really change the story; “not appreciably,” Reese added.

At the very least, we know that Reynolds teamed up with Fred Savage to recreate a visual from The Princess Bride, right down to the room decorations. Savage reprised his role as the sick boy whose grandfather read him a now-classic story, and it appears that Deadpool might now “read” Savage the story of Deadpool 2.

As for whether Reese and Werner added meta-commentary toward the fridging subplot now that they know what the infamous comic book trope is? We’ll have to wait until the re-release to find out.

“We don’t want to mislead nor do we want to spoil,” Wernick said. “As we get closer, we’ll see what the studio will let us talk about. I wouldn’t reveal too much about it because it’ll ruin the fun for the audience.”