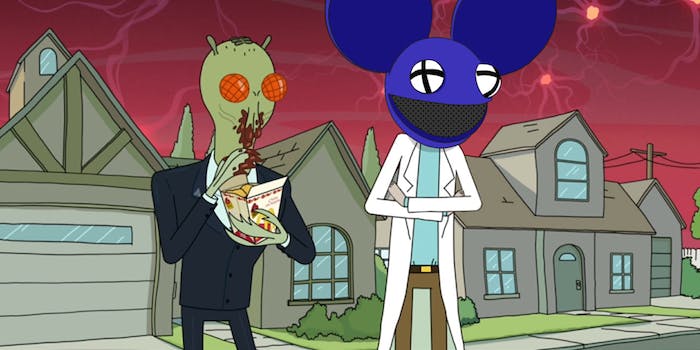 Screengrab via Rick and Morty/YouTube Remix by Jason Reed

He had enough for everyone.

McDonald’s Szechuan sauce—the defunct promotional dipping sauce tied to Mulan from nearly 20 years ago—has been a source of joy, anguish, and embarrassment for Rick and Morty fans for around six months now. But some fans unexpectedly found themselves getting their hands on it after Deadmau5 surprised concert-goers at his Toronto show earlier this week with nearly two liters of the sauce.

How did Deadmau5 even get his hands on that much Szechuan sauce? A few months ago, McDonald’s randomly selected three fans to receive 64oz tubs of Szechuan sauce after sending one to the cast and crew of Rick and Morty. One of them, ComicBook.com’s Robert Workman, placed his tub on eBay and promised to donate some of the proceeds to charity. At the time, Deadmau5 (real name Joel Zimmerman) revealed that he was “in the middle of a bidding war over a 64oz bottle of Szechuan Sauce.”

Although Deadmau5 didn’t win that original bidding war, Workman offered him the Szechuan sauce after the original bidder no longer wanted to buy it. A short time later, he showed off his tub of Szechuan sauce and promised that “I will be enjoying the hell out of this sauce when we get back from our honeymoon.”

Fast-forward to October and the state of Rick and Morty fandom—as well as attitude toward Szechuan sauce as a concept—has changed dramatically. The creators of Rick and Morty have denounced its toxic fans after some of them harassed and doxxed the show’s female writers, and McDonald’s attempt to cash in on Rick and Morty fans backfired tremendously with nowhere near enough supply for demand, resulting in the some toxic members of the fandom to harass McDonald’s employees in real life and McDonald’s promising more sauce this winter. But fans attending Deadmau5’s concert in Toronto on Sunday night had no idea what was awaiting them when they saw the muscian perform.

So I got a little surprise for you guys in Toronto tonight… I won't spoil it.

He purchased 1,000 Chicken McNuggets—“enough to feed the whole fucking club,” he said on stage—and placed within a cup containing some Szechuan sauce for attendees. And along the way, he helped fans fulfill their own series arc with a massive nugget party.

Thanks to @INKent and Rebel nightclub for sorting out 1,000 nuggets for everyone who came out tonight :) pic.twitter.com/zCePcj3F3v

Thanks again to the man himself, @deadmau5 for hooking up @rebel_toronto with @RickandMorty Mulan Szechuan Sauce! This was my series arc! pic.twitter.com/J4UXDXf75j

As for Deadmau5, he was happy to do what he could.

Fuck yeah! Unloaded 1.8 litres of Szechuan sauce with my friends at the toronto show at rebel :) https://t.co/SCWY88oYxU

I don't fuck around. https://t.co/oTcsFotKrE

In at least one place last weekend, there probably wasn’t a shortage of sauce.