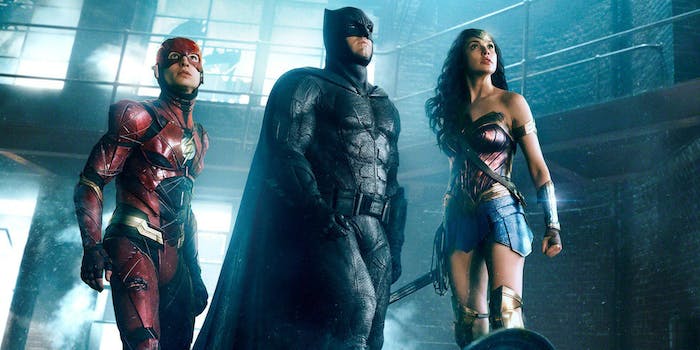 The new DC movie schedule includes 'Batgirl' and 'Green Lantern,' but no Harley Quinn or Cyborg.

As with Marvel, Star Wars, and other major franchises, we stay up-to-date with the release schedule for Warner Bros.’ DC franchise. But unlike Marvel or Star Wars, the DC calendar is kind of a mess. Warner Bros. keeps announcing and semi-announcing new projects with few details and no release dates, and the latest news is no different.

At Comic Con Experience in Sao Paolo this weekend, Warner Bros. revealed a new list of upcoming DC movies. It’s a little different from what we expected, including some films that we assumed were a long way off (Joss Whedon’s Batgirl) and excluding others that already received a lot of coverage (Gotham City Sirens). Here’s the list, courtesy of Collider editor Steven Weintraub:

To be clear, none of the new titles were accompanied by release dates. Shazam is already scheduled for April 2019, followed by Justice League 2 in June, and Wonder Woman 2 in November. Cyborg was previously announced for April 2020 but didn’t appear on this list. (Cyborg’s role was cut down in Justice League, so Warner Bros. may have decided to put this character on the backburner.)

This slate illustrates just how confusing the DC franchise is right now. We know what’s happening for the next two years, but unlike other studios, Warner Bros. has almost a dozen DC films in various stages of development with no clear plan for how they might roll out. Along with the movies we already mentioned, there are also plans to adapt Nightwing, a Joker origin story produced by Martin Scorsese, a Harley/Joker romance, a Harley Quinn solo movie, and (maybe) Deathstroke. Justice League teased the return of Superman villain Lex Luthor, but there’s no sign of a sequel to Man of Steel.

Some of the upcoming titles make sense—Shazam has already been cast, and Suicide Squad 2 is a given—but others are more surprising. For instance, is The Batman seriously still happening? Matt Reeves is still signed on to direct, but Ben Affleck has openly discussed the possibility of leaving the franchise. As for Justice League Dark, neither it nor Green Lantern Corps have a director or cast in place. Something’s gotta give because Warner Bros. doesn’t have the time or money to make all these films at once. The most high-profile example is the plethora of Joker and Harley Quinn spinoffs in development, with Jared Leto admitting he has no idea what’s going on.

A few days before the new movie slate was announced, Warner Bros. made some changes to its DC creative team. According to Vanity Fair, the studio was in “a panic” over Justice League‘s weak box office results. Producer Jon Berg moved to another position at Warner Bros., with longtime DC writer/producer Geoff Johns rumored to be leaving as well. At the same time, there’s widespread speculation that Zack Snyder won’t return for more movies. The studio is expected to promote a new producer to guide the creative direction of future films.

The DC franchise has never reached a point of equilibrium. While Marvel methodically built out its cinematic universe using house style that is consistent and reliable (if occasionally bland), DC is all over the place. There’s a massive tonal difference between Wonder Woman and Batman v Superman, while Justice League changed drastically during reshoots. It wound up being a weird mix of dark Zack Snyder content, Joss Whedon humor, and clumsy franchise tie-ins. For DC fans, none of this feels like a good sign. With behind-the-scenes reshuffles and a release schedule that contains more question marks than concrete plans, you get the impression that while Warner Bros. can make good decisions on an individual level (Patty Jenkins for Wonder Woman; Jason Momoa as Aquaman), the studio can’t manage big-picture thinking.