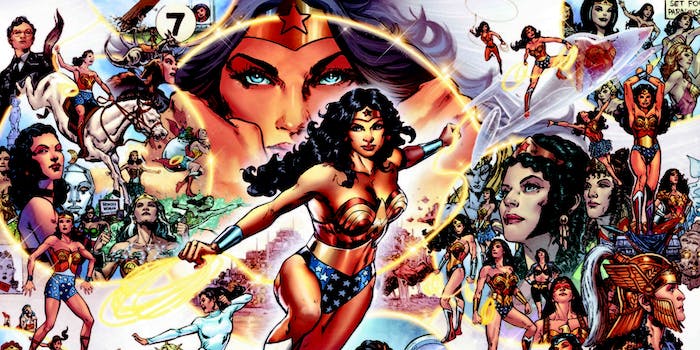 Did this Hollywood blogger just out DC’s Wonder Woman plans?

The former founder and editor-in-chief of Deadline is claiming an inside source that's sitting on a goldmine: A new Wonder Woman movie.

One of Hollywood’s biggest gossip journalists is going all-in for her own blog launch with a rumor about comics fandom’s No. 1 Most-Wanted: An actual sighting of a Wonder Woman film.

Nikki Finke, former founder and editor-in-chief of Deadline, launched her own blog yesterday, NikkiFinke.com. She hit the ground running, claiming to have gotten a major scoop that reveals DC Comics is planning a major San Diego Comic-Con announcement: a Wonder Woman movie scheduled for 2017.

DC recently announced a slate of films through 2018 that included titles for several other members of the Justice League, including a Justice League movie. But while Gal Gadot is contracted to play the Amazonian superhero for at least three films, a Wonder Woman movie was nowhere on the list.

Could DC Comics have simply been saving the big announcement for Comic-Con? The 2017 release date for a Wonder Woman film slots nicely in with Marvel’s October announcement that it had no plans for a female-led movie before 2017.

In the meantime, there are plenty of other surprises on DC’s rumored Comic-Con list—if true:

Of all of these, Shazam seems the most out of step, tonally, with the rest, but it fits with DC’s probable attempts to go wacky and lighter alongside Marvel’s Guardians of the Galaxy. The Sandman movie is a previously confirmed vehicle produced by Joseph Gordon-Levitt alongside Neil Gaiman and screenwriter David Goyer.

Finke’s unnamed source said that the delayed release date for Batman vs. Superman had to do with contract negotiations as DC and Warner Bros. attempted to line up stars for future movies in order to make cameo appearances in their earlier ones:

The cameos will include the already known Cyborg and Flash. Green Lantern [not played by Ryan Reynolds, thank god] may be introduced.  And Aquaman will be seen in the Justice League movie. Problem is, Warner Bros Pictures was still negotiating with the actors for those cameos and future roles, meaning major contracts for multiple JL/character films to follow. … Seemingly simple reason, but the implications are pretty darn huge.

If true, we could be seeing even more interesting teamups and solo vehicles for DC stars like Aquaman after the 2018 mark. But how reliable is this lineup? So far, DC’s been mum, though they have made regular Facebook updates since Finke’s attention-grabbing post.

Still, there’s a lot riding on Finke being right—not just the hopes and dreams of Wonder Woman fans around the globe. Finke left Deadline last fall after selling it for a reported $14 million in 2011. But she carried her legacy with her—that of a fearless, cutthroat journalist who rarely named sources and went hardball to get early scoops from the entertainment industry.

Yesterday, Finke launched her independent blog site, vowing to deliver “this town’s gritty reality exposed through the harsh glare of my reporting.” At Deadline, Finke was perhaps the most-feared, ruthless gossip reporter in Hollywood. So she needs attention-getting, accurate early scoops now to put her new site on the map in a wide field of entertainment media.

The DC Comic-Con announcement was the very first to go up on Finke’s website after her introductory post. Although no additional attention was given to the Wonder Woman detail, it seems intended to be the scoop heard around the geek world.

Even if Finke is ultimately wrong about a 2017 Wonder Woman movie, we now have plenty to digest in the month before Comic-Con. And it’s meaningful that one of Hollywood’s famed gossip reporters chose to open her new website with a nod to the significance of a Wonder Woman movie, not just for geeks, but for women everywhere.