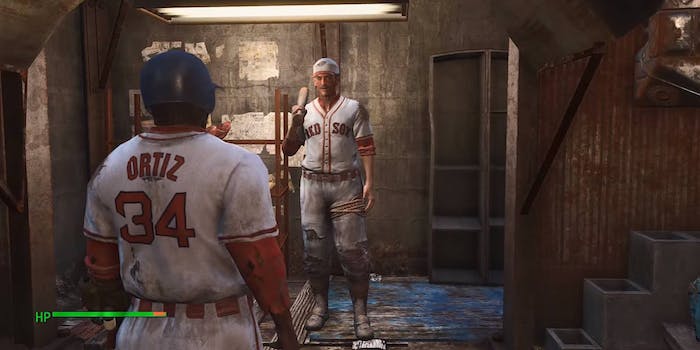 The Red Sox player was one of the more interesting mods to show up.

One of the greatest aspects of PC gaming is the ability to mod a game, but sometimes that may not jive with certain content holders.

Fallout 4, the video game sensation taking over living rooms nationwide, has started to see some interesting mods. There are your standard graphics mods, which increase the visual fidelity. Then there are ones that are more obscure, like adding David Ortiz in his Red Sox uniform.

Modder Richie Branson decided to throw the legendary baseball player into Fallout 4 because the game takes place in a post-apocalyptic Boston. The Boston Globe got comment from Major League Baseball, which stated: “The use of these marks is an infringement of our rights. We plan to enforce those rights.”

So it seems that MLB will ask Branson to take down the mod, but as with anything on the Internet, once it’s online, it’s forever online. As of now, the mod appears to be under moderator review at Nexus Mods, meaning that, for all intents and purposes, it’s dead.

At least we have this video of Ortiz in action, and of course he’s using a baseball bat.