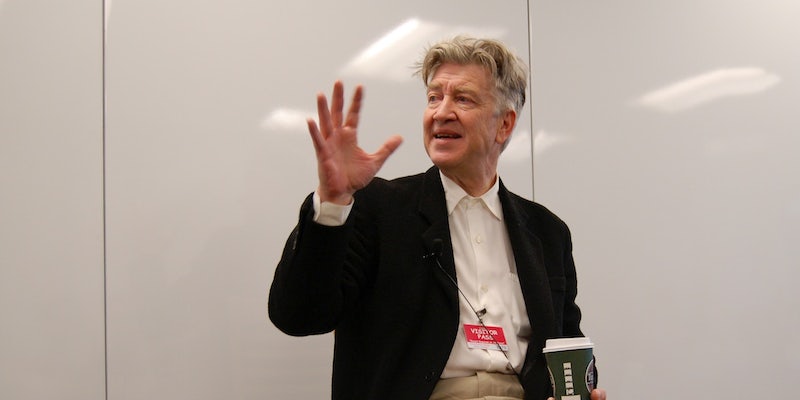 David Lynch announced that he was quitting, but was it just a pressure tactic?

The highly anticipated Twin Peaks revival may already be dead in the water.

Director David Lynch announced last year that a new season of Twin Peaks would air on Showtime in 2016, but recently there have been rumblings of “complications” behind the scenes. On Sunday night, Lynch confirmed the bad news: He wouldn’t be working on the new season after all.

Dear Twitter Friends, Showtime did not pull the plug on Twin Peaks.

After 1 year and 4 months of negotiations, I left because not enough money was offered to do the script the way I felt it needed to be done.

This weekend I started to call actors to let them know I would not be directing. Twin Peaks may still be very much alive at Showtime.

I love the world of Twin Peaks and wish things could have worked out differently.

While David Lynch only directed a few episodes of the original Twin Peaks series, most fans view his creative influence as integral to the show. A modern Twin Peaks reboot without Lynch will likely struggle to retain the kind of audience that Showtime hopes to attract.

Lynch’s Twitter statement has already been picked apart by Twin Peaks fans, with all of them speculating about whether the show will go ahead without him.

In a statement released not long after Lynch’s announcement, Showtime claimed it was still trying to negotiate with the director.

“We were saddened to read David Lynch’s statement today since we believed we were working towards solutions with David and his reps on the few remaining deal points. SHOWTIME also loves the world of Twin Peaks and we continue to hold out hope that we can bring it back in all its glory with both of its extraordinary creators, David Lynch and Mark Frost, at its helm.”

It’s possible that the public nature of Lynch’s announcement is part of a strategy to put more pressure on the network. If that’s the case, then it may already be working. Over 4,000 people have already signed a petition asking Showtime to “Save Twin Peaks” by listening to Lynch’s demands. At this point, Showtime will probably end up looking like the villain if it can’t get Lynch back onboard.

Photo via Aaron/Wikimedia (CC BY 2.0)